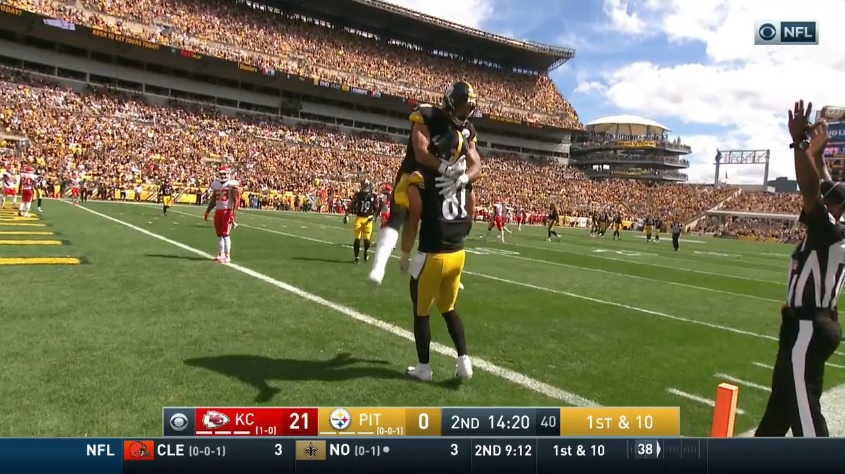 I know, I know. You thought this page would be blank, didn’t you?

But for real, despite how tough it was to see the Pittsburgh Steelers give up 42 points and fall to 0-1-1 on the season, there are still some positives to take away from it. Even on the defense.

So as doom and gloom as we’ve been, and I know I’ve been driving that bus (read Matthew’s article, it helped talk me off the ledge), let’s take just five minutes to look at the couple of things that went right last Sunday.

– Ben Roethlisberger looked pretty good for being tasked to throw the ball 60 times coming off a week where he practiced just once.

– The offensive line did well in pass protection. Sure, the Chiefs played it safe with plenty of three and four man pressure. But even in those situations, you’re still getting a one-on-one matchup somewhere most of the time. Alejandro Villanueva has come out of the gates better in 2018 than he has the last two seasons, despite some difficult matchups (Myles Garrett and Dee Ford). He’s yet to give up a sack.

– James Washington held his own for his first game of meaningful snaps, playing 66 of them. The first catch he made, negated by penalty, showed him running a good curl route. Physical at his break point and then worked back to the football to box out the corner and make the play. He also got his first Hines Ward block of his career. Contributed in plenty of ways his first time out.

– Jesse James is such an asset in scramble drills. That’s how he made many of his big plays. Find open grass, get in Roethlisberger’s vision, and make a play. Have a lot of respect for him.

– JuJu Smith-Schuster is really coming into his own. 21 year old about to break some records for his age. High football IQ, a better YAC threat this week, and an awfully consistent player.

– Ok, I know this one is tougher. But still admire Cam Heyward’s hustle and heart. Ran down the receiver to force the fumble in the 4th quarter. I know this sounds super corny but I love the little things in his game: A congratulatory head butt for Chris Boswell when he makes his extra points. Getting Patrick Mahomes’ attention on the final kneeldown to shake his hand and I assume say, “Good game.” He’s a professional and leader who holds himself to the highest standard.

– Jon Bostic is who he is. A guy that is playing the run well. No problems with that area of his game.

– Defense did a nice job on the safety. T.J. Watt and Jon Bostic getting penetration, Artie Burns flying in to clean it up. As bad as things got, they did force that safety and create a turnover in the second half.

– I didn’t think Cam Sutton was terrible despite getting benched and rotated with Coty Sensabaugh, who also played reasonably well. Sensabaugh had a key open field tackle on Tyreek Hill that likely saved a touchdown.

– Roosevelt Nix had an amazing pancake block on the first kick return following the safety.

– The one time it felt like Jordan Berry was able to let his leg get loose and not worry as much about direction, it resulted in a 59 yarder that landed at the one and set up the Steelers’ safety. Not all hope is lost.