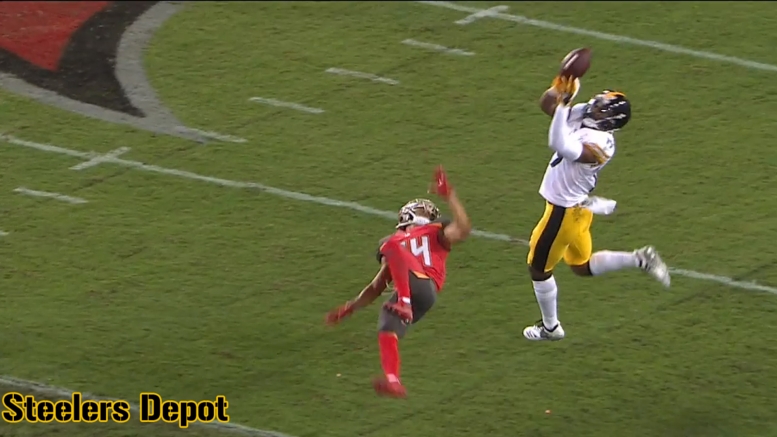 Given that the Pittsburgh Steelers actually won their last game, I’m hoping that I will be permitted to actually indulge in some random stat-churning that would ordinarily be met with a chorus of “who cares, we lost”. Either way, I think it should be acknowledged what second-year wide receiver JuJu Smith-Schuster has been doing.

In each of the Steelers’ three games played so far this year, the USC product has averaged nine receptions for about 119 yards. He has gained between 116 and 121 yards, meaning that he has gone for over 100 in each game played.

Going back to last season, it’s the fourth regular-season game in a row in which Smith-Schuster has recorded 100 yards or more receiving. He caught nine passes for 143 yards in the 2017 regular season finale against the Cleveland Browns.

He is just the fourth player in franchise history to record 100 or more yards through the air in four consecutive games, and his current streak is only the fifth time that it has happened. Antonio Brown has managed to put together two four-game streaks in his career, between the 2014 and 2015 seasons and then during the 2017 season.

Prior to that, Mike Wallace actually recorded 100 or more yards in six consecutive games between the 2010 and 2011 seasons, which is the only streak longer than six games in team history. Only 10 players have ever recorded a streak of six or more games in NFL history. Calvin Johnson holds the record with eight games in a row during the 2012 season, the year in which he recorded nearly 2000 yards.

The four-game feat was first accomplished by Jimmy Orr in 1958—his rookie season during which he recorded 910 yards in 12 games on 33 receptions. Smith-Schuster just so happened to break Orr’s record for receiving yards in a player’s rookie season, though he did it in two more games.

In case you were wondering, while he has the opportunity to become just the second Steelers player in NFL history to record 100 yards or more in five consecutive games, he would be the 22nd player overall to do it. It was most recently done by Odell Beckham, Jr. during the 2015 season. He his six games in a row. Only five players have done it in the past decade. Surprisingly, half of them came between 1951 and 1972. Nobody did it between 1972 and 1995.