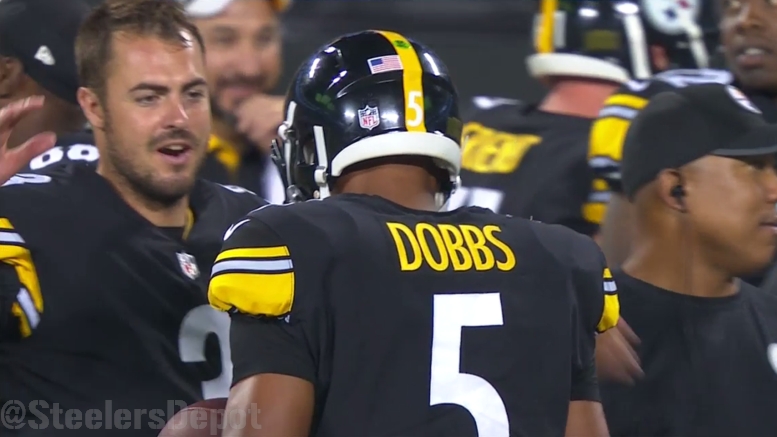 Joshua Dobbs told reporters yesterday that he received a phone call on Saturday just about 20 minutes ahead of the 4PM cutdown deadline from his offensive coordinator. I can’t help but wonder if the young Pittsburgh Steelers quarterback was nervous about picking up. It was 3:42 PM. 18 more minutes before he would surely be safe.

Landry Jones had been informed earlier in the day—it’s not clear how much earlier—that he would not be making the team for the sixth year. He went from being a backup quarterback one snap from playing to being a street free agent looking for a job in a market that suddenly includes dozens of quarterbacks.

But he wanted to call Dobbs and congratulate him and wish him the best.

“He called me at 3:47 and said congratulations, best of luck, if you ever need anything”, Dobbs said of the phone call he received from the teammate that he had known for about a year and a half. “Stand-up guy. I was thankful to have that relationship with him when he was here and moving forward”.

Roethlisberger has previously talked about how important Jones was, not just to himself personally, but also to the other quarterbacks in the room. It was Jones who did most of the mentoring of Dobbs last season, and he openly embraced that same role with Mason Rudolph this year.

He did it well enough to get himself out of a job, of course. But that’s how the NFL works. That is how the Steelers turned over their roster for many years. The veterans would coach up the young players until they were ready to take over.

“I was thankful for the opportunity to learn behind him and get a chance to learn how he approached every day, treated his job like a professional”, Dobbs said of his experiences working with Jones over the course of the past year-plus. “He was awesome”.

Not that there is really any way to fully prepare for it beyond trial and error. It’s not something that you can be ready for entirely before you actually experience the real thing. But he thinks he’s ready to face that. The Steelers think he’s ready. That’s why he’s here, and Jones is not.