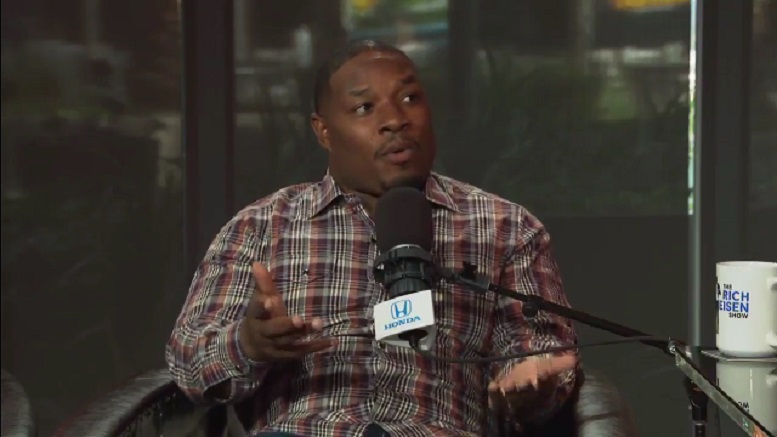 Pittsburgh Steelers running back Le’Veon Bell will miss his third game of the 2018 regular season Monday night and there’s a good chance that several more missed games will follow. On Friday, former NFL running back Maurice Jones-Drew, who is now an analyst for the NFL Network, was a guest on ‘The Rich Eisen Show’ and during the interview he shared what he currently knows about Bell, whose agent Adisa Bakari represented Jones-Drew when he played.

They share an agent, so how does @nflnetwork analyst @MJD think the @LeVeonBell situation ends for everyone involved? pic.twitter.com/V5tfMSP3CN

During the interview, show host Rich Eisen asked Jones-Drew if he thinks or knows if Bell will wait until Week 11 to report to the Steelers and sign his franchise tag tender.

“Listen, I wrote an article saying I wouldn’t show up until Week 11 if I could do my holdout all over again,” Jones-Drew said. “I wouldn’t have shown up until Week 11, that’s me saying obviously after I did it. I don’t know when he’s [Bell’s] going to come back. I really don’t and I’ve tried to pry it out of my agent, he won’t spill the beans. But he will show up. He’ll show up.”

Jones-Drew then proceeded to double down on his prediction that Bell will eventually show up and sign his franchise tag and play this season and why he thinks that way.

While I do agree with Jones-Drew’s prediction, I don’t agree with his reasoning. In fact, Jones-Drew is wrong when he says that Bell needs to show up in order to be a free agent next year as that’s just not true. Bell doesn’t need an accrued season this year as he was already an unrestricted free agent this past offseason. I wrote on Friday why I think Bell will show up and sign his tag and play by the start of Week 11 and that reasoning is related to him not being able to be franchise tagged by the Steelers again next offseason at the same $14.544 million amount as this year.

Earlier during the Friday interview with Eisen, Jones-Drew was asked why he thinks Bell ultimately decided to carry his holdout into the regular season after Bakari, his agent, said back in the middle July that he expected his client to repeat his actions from 2017, meaning that a Week 1 reporting and signing would likely happen after bypassing training camp and the preseason. Jones-Drew told Eisen he thinks Bell changed his mind initially after seeing the contract that the Los Angeles Rams signed running back Todd Gurley to at the end of July.

“I think it was the Todd Gurley contract,” Jones-Drew said. “I think it then was after that, the players [Bell’s teammates] speaking out. I think it then was after that seeing David Johnson’s contract. And, you know, the difference in guarantee. So, for all our listeners and people that are watching, as a running back, you don’t look at the total number. So, it may be a $80 million dollars. A majority of the running backs don’t see that. I think Adrian Peterson signed $100 million deal and didn’t see all of it, he only got three years of that.

“So, you need to focus on the guarantee because our position is so brutal, it’s so tough, you get hit every play. The Steelers were offering Le’Veon $19 million guaranteed. I don’t think that’s a real good number. And they were signing a four or five year deal with that, where David Johnson signed a three year deal for 30 [million} and then Todd signs a $45 mullion deal. That’s where it becomes what we call a disrespect.”

First, it’s interesting to hear Jones-Drew say that the Steelers offered Bell $19 million guaranteed as part of the contract the running back turned down this past July. If you remember, the previous reports indicated that Bell was only offered just over $10 million in fully guaranteed money. Now, is Jones-Drew saying that the $19 million was fully guaranteed, or just virtually guaranteed? Really, it doesn’t matter because I pointed out in several different posts since then, Bell was going to get that $18-$20 million in 2018 barring him doing something stupid. That $19 million that Jones-Drew is referencing was a signing bonus, 2018 base salary and any other year-one roster bonus amounts. There was no way Bell wasn’t going to see that money as long as he didn’t do anything stupid and the same goes for the money he would have been scheduled to earn in 2019 and 2020 as well, which reportedly would’ve been $45 million.

Now, Jones-Drew also referenced the Gurley contract on Friday as possibly being $45 million fully guaranteed, but that’s factually incorrect. While the deal that Gurley signed included $45 million in guarantees, only $21.95 million was actually fully guaranteed at signing and that reportedly included a $21 million signing bonus and a 2018 base salary of $950,000. Sure, the rolling guarantees from there are virtually a certain to be paid out to Gurley, just like Bell was virtually guaranteed to also earn $45 million in his first three years of the deal he turned down.

As for Jones-Drew referencing running back David Johnson signing a three year, $39 million contract extension with the Arizona Cardinals just prior to the start of the 2018 regular season, make sure you know that as far as fully guaranteed money in that deal goes, his amount was reportedly just a little more than $24.6 million.

Assuming the $19 million guaranteed amount that Jones-Drew referenced on Friday as possibly being the fully guaranteed portion that Bell was offered is true, it still would have been lower than what Gurley and Johnson both ultimately received in fully guaranteed money this offseason. However, those other two running backs signed their new deals after Bell turned down the Steelers final offer.

Jones-Drew, as you would probably expect him to do, strongly defended Bell’s decision to turn down the Steelers best offer.

“We do share an agent and I’ve spoken to him [Bell] a couple of weeks ago. Again, I wrote an article about it and we talked about it on a ‘Game Day Morning.’ The NFL has to understand that you can’t put a square peg in a round hole,” Jones-Drew said. “You can’t do that. You just can’t say he’s a running back so he has to be paid this much when he has been 50 percent of your offense, or 40 percent of your offense, has been a dual threat for you.

“Le’Veon’s a very smart businessman and a lot of people may not see that, but he understands his worth and he had to weigh his options with; Do I go out here and I get 30 carries in Week 1, 30 carries in Week 2, 30 carries in Week 3 and then possibly be worn down and not be able to maximize my potential in free agency? Or, do I sit out with the franchise tag by not signing it, not getting fined? Yes, he’s losing money each week, but I think he weighed those options and so we’ll wait to see when he comes in. But now we see that Le’Veon’s a bigger part to this Pittsburgh Steelers team that a lot of people thought.”