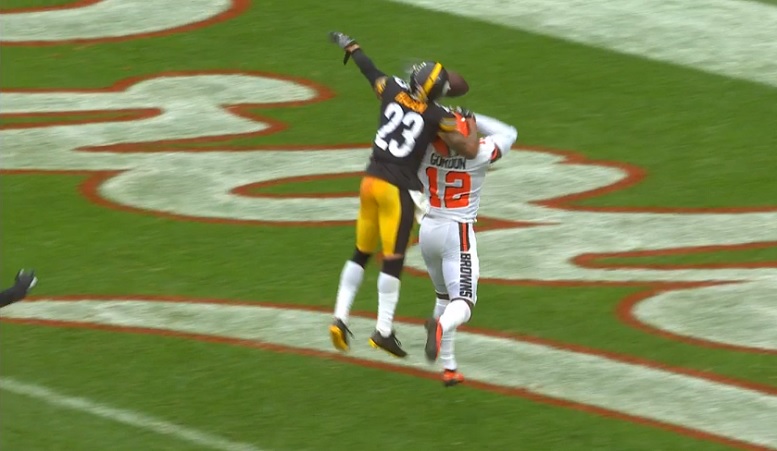 The Pittsburgh Steelers are eagerly awaiting the return of Joe Haden, their top cornerback—if only to give them the opportunity to put their other starter on the bench, apparently. Artie Burns and Coty Sensabaugh both confirmed that the latter took first-team reps and that he may start tomorrow’s game.

It would be a virtual impossibility of Haden were not to return, as it would mean that the starting lineup would consist of Sensabaugh and Cameron Sutton—not exactly what you want. So if Sensabaugh does start for Burns, it at least does mean that Haden has returned.

And he certainly appears ready to do so, telling reporters that he is “feeling good to go”. He admitted that he held things back early in the week during practice, but went full steam ahead at the end of the week to test himself out, and he has been no worse for the wear since.

Haden suffered a hamstring injury during the season opener against the Cleveland Browns, forcing him out of the game during the fourth quarter, in which Sutton gave up the game-tying touchdown that would eventually prove to be the final points scored.

The injury resulted in the two-time Pro Bowler missing last week’s game. The Steelers seemed intent on having Sutton start the game, but after he struggled, Sensabaugh began to rotate in. The secondary as a whole struggled, but the rotation on the left side certainly did not help matters.

But as much as it might have pained Haden to watch his teammates get beat last week, he understands that there is no rushing back from a soft tissue injury. Doing so would result in risking a setback that would make matters even worse in the long run.

“I think we went about it the right way”, he told reporters regarding how the Steelers handled his injury over the past two weeks. “So I was able to go and not really feel it, so I think we are in a good place”.

There was some minor controversy, at least among fans, regarding just how Haden’s injury occurred. While I’m not much of a fan of it myself, the Steelers over the past two years have been using their starting cornerbacks as their primary jammers on punt returns.

“I like to do it”, he said, adding that it is something that he has been doing throughout his career. A quick check with Pro Football Focus appears to bear this out, to my surprise. For example, in 2013, he led all Browns in punt return snaps with 83. He logged 149 snaps on special teams that year. So it is not new to him.

Using starters from offense or defense on special teams is a topic that can get heated. When Troy Polamalu suffers a knee injury, it’s terrible. But when T.J. Watt salvages a result by blocking a field goal…