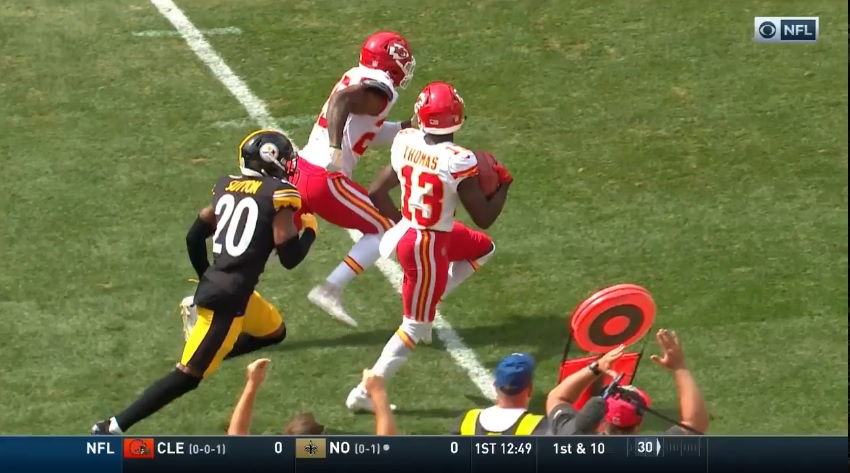 As I did in the preseason, I’ll continue to take a look at the 5 biggest plays that changed the game from my perspective.

Sunday afternoon’s debacle at Heinz Field in Pittsburgh was filled with plays that changed the game, but I’ll narrow it down to 5. Let’s take a look.

This might not be considered an official play, but for the purpose of this article, I’m going to go with it being a play, simply because of how it swung the game in the Steelers’ favor.

Deep in their own territory facing a 3rd and 10, Ben Roethlisberger is sacked by Justin Houston. In the process of the sack, Roethlisberger fumbles, resulting in a mad scramble for the football.

Pittsburgh capitalized on the second chance as Roethlisberger found Jesse James from 26 yards out, getting Pittsburgh on the board, jumpstarting their comeback before the half.

If this play would have stood, who knows how the Steelers respond down four scores late in the first quarter.

This was a classic Roethlisberger play.

Scrambling around late in the half trying to make something happen, Roethlisberger finds James Washington for a 14-yard touchdown. However, on live TV it looked like Roethlisberger was clearly over the line of scrimmage when he released the pass, which should have resulted in an illegal forward pass penalty.

That would have made it 4th and 15, forcing the Steelers to settle for a Chris Boswell field goal try.

Instead, the officials reviewed the touchdown and allowed it to stand, allowing the Steelers to try for a 2-point conversion, tying the game right before the half.

First catch in the NFL… might as well make it a touchdown.

At this point in the game, the Steelers trail 35-28 after matching the Chiefs score for score early in the fourth quarter. Following a Demarcus Robinson touchdown catch from Patrick Mahomes, the Steelers tried to answer, but the ensuing offensive drive was bad right from the get-go.

A 5-yard catch from Stevan Ridley and a 2-yard run from Ridley set up a 3rd and 3. The Steelers spread it out and Roethlisberger looked for Ryan Switzer out of the slot.

Switzer read zone coverage and sat down past the sticks, but it appeared as though Roethlisberger expected Switzer to continue his out route toward the sideline.

Following a safety by the Steelers defense, Kansas City had to free kick the ball away. One play before this punt, Antonio Brown returned Dustin Colquitt’s free kick 20 yards to the Pittsburgh 47.

However, on Brown’s return, Ridley was called for illegal formation on the play. The Chiefs elected to re-kick with an addition 5 yards. On the second free kick, Switzer returned it, but caught the ball along the sideline instead of letting it go out of bounds. Switzer returned the free kick to the Pittsburgh 30-yard line, a loss of 17 yards from the previous kick.

After the re-kick, the Steelers ended up punting the ball away unable to capitalize on the added possession thanks to the defense.

This occurred on the fourth play of the game, but it really set the tone for what would transpire moving forward on Sunday afternoon with the Chiefs.

Kansas City had great design on the punt return as the Steelers focused solely on Hill. De’Anthony Thomas lined up in front of Hill before the kick, and as the Steelers coverage team focused on Hill’s whereabouts as they sprinted down the field.

The coverage team completely forgot about Thomas, who caught the punt along the right sideline and proceeded to race 48 yards up the field, setting up the Chiefs at the 10-yard line.