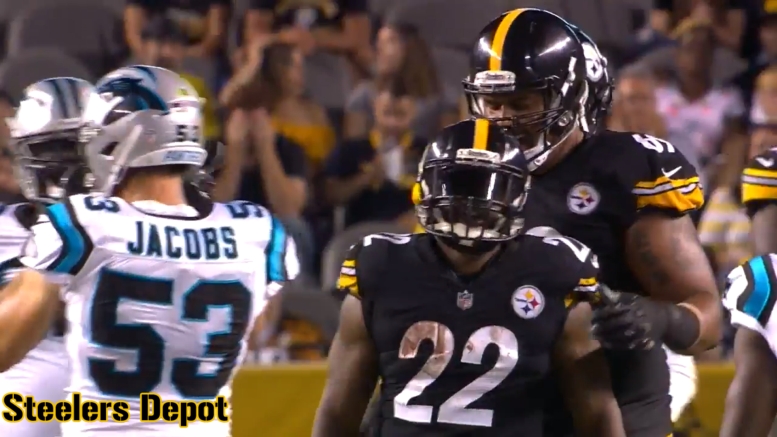 Second-year offensive tackle Zach Banner making the 53-man roster was arguably one of the bigger ‘surprises’ that the Pittsburgh Steelers made on Saturday as they trimmed their roster down to 90 players. A 2017 fourth-round pick of the Indianapolis Colts, he ended up with the Cleveland Browns, active for eight games, but he had been a street free agent since the end of May before Pittsburgh signed him on August 12.

He used the time between then and the end of the preseason to quickly work his way up the depth chart and solidify a spot on the 53-man roster—though solidify may be a strong word, as he is likely no better than the 51st man, and perhaps even the 53rd.

Irrespective of his long-term security, the fact remains that he earned his current status by performing well in the preseason, and at least for the time being has the distinction of being carried as the team’s ninth lineman, showing his potential during the preseason finale against the Carolina Panthers.

Let’s make one thing clear. Banner is a massive man at 6’8” and a listed 360 pounds. But he knows his size, and that means he knows how to make use of it. He’s a hard man to get around in pass protection, especially with his nearly 35” arms, as the first rep of the game shows.

One issue that he is inevitable going to have is mobility. While he is actually fairly mobile for his size, he is not somebody who is going to be able to get it going again quickly if he comes to a stop. That’s what you see here toward the end of this rep, though he ultimately kept the pocket clean for Joshua Dobbs, and by the time his man turned the corner, it was about four seconds into the play.

Banner also liked to throw his weight around in the running game and has gotten himself a few pancakes his preseason, but he can get on the move, too. Here, he helps to set up a 17-yard Stevan Ridley run early in the second quarter with a downfield block at the second level.

Still, Mike Munchak is still going to have his hands full with the 24-year-old. He’s only had his hands on Banner for a few weeks now, and his mechanics need a lot of work to match his frame. While his size is an asset, it’s also a crutch. Here, he tries to swat the edge rusher’s arms down but still loses the corner. Not that that stopped this from going for six.

I like Banner, I like his potential, and, ultimately, I like the decision to carry him on the roster. He may have been unemployed for almost a month and a half, but he got the opportunity to put in a lot of good tape over three games, logging 92 snaps. A young tackle with pedigree who’s been on a roster before and is showing marked improvement is not necessarily the one you want to take a risk on waivers with.