Calling a coach “predictable” is pretty common from any fanbase. More often than not, it’s a wrong assessment or at best, a vague one. Knowing a run is coming or a screen pass, something generic that you can call ten times in a row and you’re bound to be right a couple times. There’s much more to a coaches “predictability” than that.

So believe me when I call Keith Butler predictable, it’s not something I use lightly or loosely. But he has been the first two weeks. And it’s a massive problem for this Pittsburgh Steelers’ defense.

There’s no better example I can think of than a two play sequence from Sunday against the Kansas City Chiefs. Two plays you probably remember well and are scratching your head of how that happened. It comes at the start of the second half, the first two snaps of the third quarter.

How do the Steelers give up such an explosive play? And how did Watt end up on a wide receiver who runs 4.43?

On both these plays, the Chiefs went to an empty set, five wide. The Steelers are in their 2-3-6 dime defense. Butler wants to come out swinging and dials up an overload DB blitz. It’s similar to Dick LeBeau’s Thunder Fire Zone, shown below, but instead of playing zone and pattern matching behind, they run Cover 1.

Maybe that’s an empty check to simplify the matchups with the defense forced to cover so much space. The safety, Sean Davis in this case, slides to the blitz side to provide help over the top. 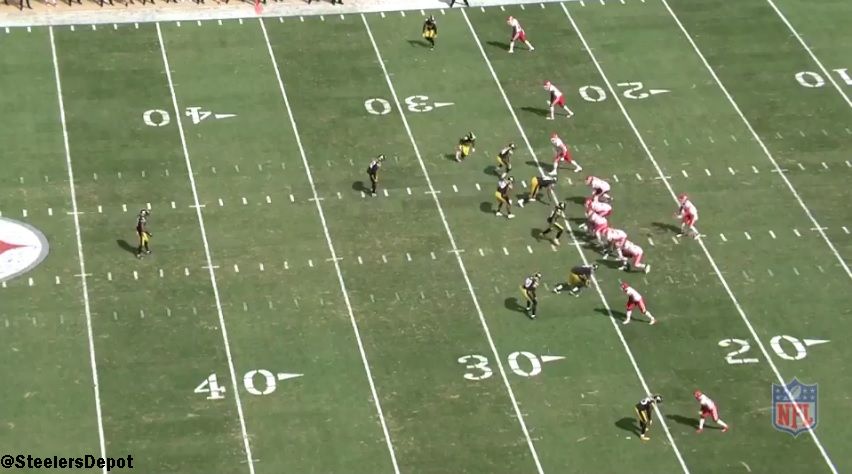 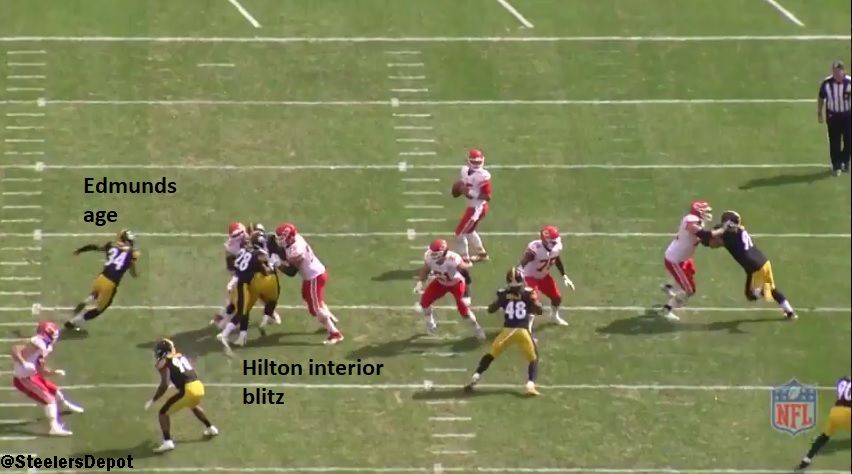 The first play is, in part, just a heck of a throw by Mahomes. Back shoulder to Tyreek Hill working on Artie Burns. Burns can’t make the tackle initially and eventually has to track him down after a big 36 yard gain.

Did you notice something…off about that play though? The Chiefs sure did. Check the slot. There’s T.J. Watt, walked off ball and over Sammy Watkins. It was well-covered, Watkins ran a short curl, so no harm there. 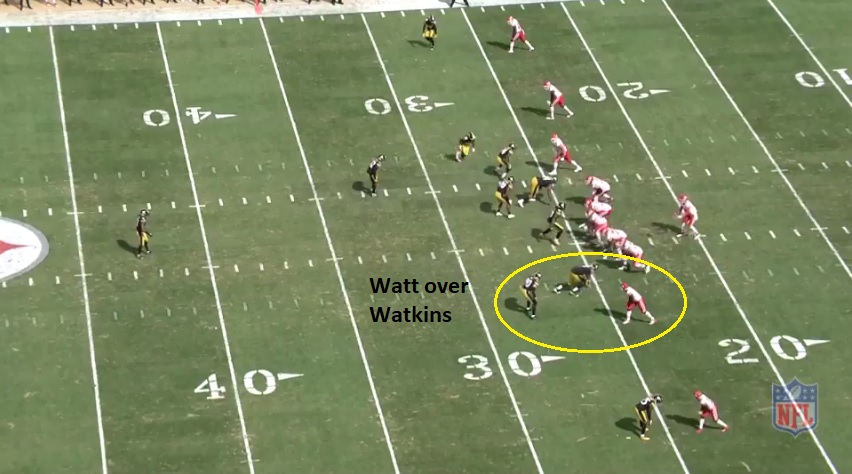 But the Chiefs knew that was a matchup to take advantage of. So what did they do on the next play? 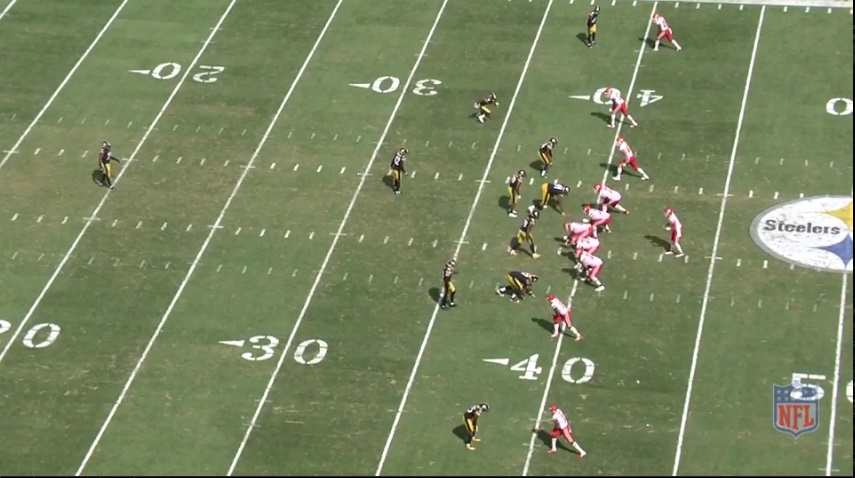 And the Steelers did the same thing. DB blitz with Hilton and Edmunds. Watt in man coverage on Watkins. And that’s what the Chiefs look to take advantage of.

Instead of running Hill vertically, or Watkins on a curl, they switch assignments. Hill runs a one step smoke to hold Burns in the flat. That opens Watkins up vertical, predictably toasting Watt down the seam. And with the deep safety sliding to the blitz side, there’s zero chance of help over the top. By design, Watt is 100% on his own. 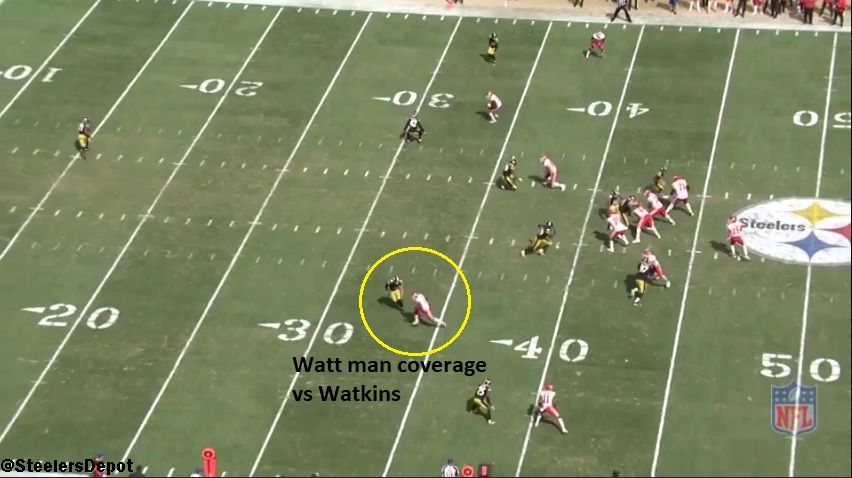 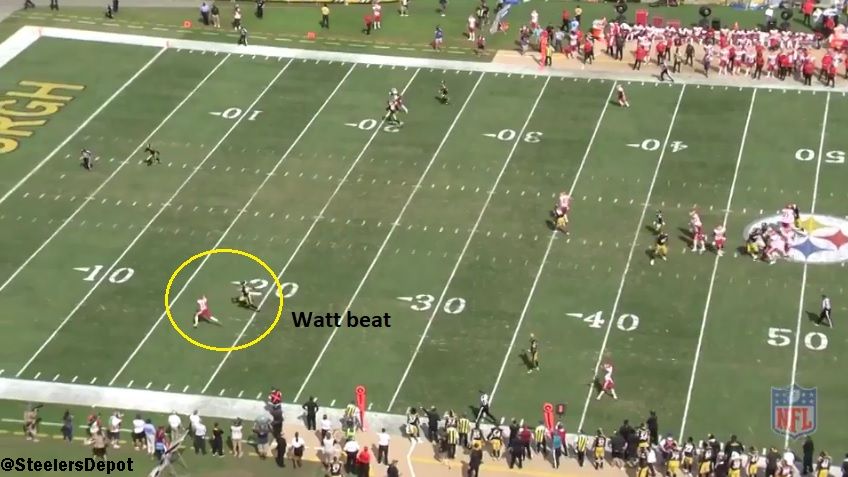 The only saving grace here is that Mahomes has too good of an arm. The pass skips feet in front of Watkins. That doesn’t stop the Chiefs, who score several plays later, taking the 2nd half lead and regaining control.

It’s a play that gets overlooked because it looks innocuous on the box score. Incomplete. But coaching is all about process. Not always the outcome. This isn’t the Chiefs coming up with an exotic scheme and exploiting a matchup. It’s the Steelers handing it to them on a silver platter. They lost as soon as they lined up and it’s obvious to see.

Keith Butler got out-coached here. Horrendously so. The Chiefs got a good look, realized the matchup after the first play, and then dared the Steelers to do something else. They didn’t and should’ve paid the price. This is the stuff that gets a coordinator fired.

There’s two explanations for this. One against Butler, the other against the players.

1. Butler is just doing a bad job. Not realizing the matchups he’s putting guys in, not having enough answers for when teams go empty. Beyond this play, the Chiefs ran empty a ton in the 2nd half with routine success.

2. Butler doesn’t trust the players to add more to the playbook. Instead, he wants to simplify the defense, attempt to limit miscommunication, and streamline things. Adding more information just runs the risk of players not handling it well.

Either way, it’s a terrible statement about the state of the defense. There’s either a lack of trust in the DC or in the players to do their jobs. The result is a disaster like this. Man coverage by a linebacker on a team’s speedy, #2 receiver. It should’ve gone for a touchdown.

The Steelers deserved it.