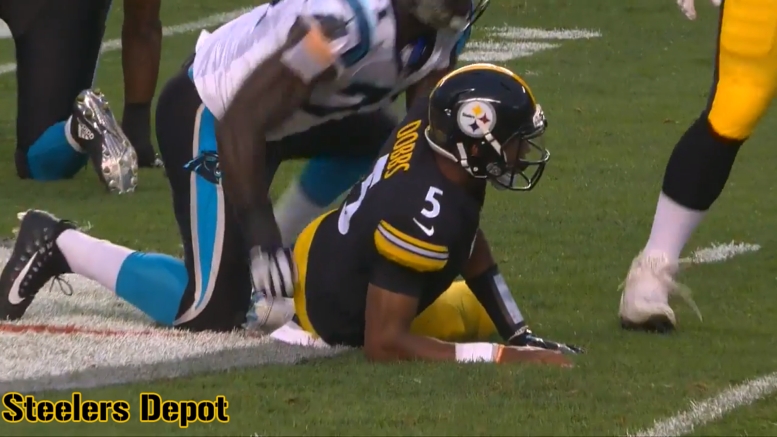 Joshua Dobbs had a readymade fanbase when he first joined the Pittsburgh Steelers: the Anybody But Landry contingent. That group grew even stronger when the team drafted Mason Rudolph, sensing the opportunity to knock Landry Jones off the roster for good.

The final preseason performance from the second-year quarterback played a pivotal role in doing just that. Like the offseason itself for Dobbs, he kept taking his hits, but standing tall and unbowed. His composure under duress was arguably the most important feature of his showing, and the quality that I would like to highlight below.

Very early in the game, the Steelers called for a lot of naked bootlegs and rollouts for Dobbs, but the Carolina Panthers more often than not were prepared for this, and it resulted in the young quarterback regularly having pressure on his face and being forced to offer a counter.

That is what he did on this second-down play, rolling out to his right off play-action. He immediately faced unblocked pressure, which he was forced to spin out of before he fired the ball down the field. He did lead the ball just shy at wide receiver Trey Griffey’s feet, which resulted in an incompletion.

That play set up a third and 10. Dobbs hung in the pocket, waiting for the play to develop, and took a hit below the waist as he threw, finding a fairly wide open Justin Hunter ready for the receiving end of his pass to move the chains.

A couple of plays after that, he found tight end Bucky Hodges wide open down the left sideline for a big gain of 36 yards, down to the three. But the throw itself wasn’t what was impressive. It was the fact that he stood in the pocket and delivered the throw, knowing that this hit was coming.

He would scramble for a touchdown two plays later, and his second drive of the game ended with another score delivered from his arm, finding Tevin Jones form 27 yards out. This was, once again, a wide-open target, but that opportunity was set up by his mobility and composure under pressure, moving the pocket and finding the open target.

Into the second quarter, Dobbs took a shot down the field for Hunter on a pass that fell incomplete, but again showed poise under duress. I might ordinarily call this an ill-advised throw, but he placed it where the defender could not make a play on it.

He very nearly had a second touchdown to Jones to end his fourth and final possession, and once again he faced unblocked pressure from a safety blitz. Despite being hurried, he was able to roll out to his spot and zing an accurate pass that arguably should have been caught, and certainly could have, though upon further review, the defender deserves credit for playing the pocket on this one.

I mentioned during the game that this was the best that Dobbs has ever looked in any of his seven preseason games to date, and it wasn’t even close. The thing that I came away most impressed with was his ability to perform with distinction under duress, and these plays best exemplify that. Hopefully the first time he’s in a real game, he won’t have to take so many hits to deliver the ball.