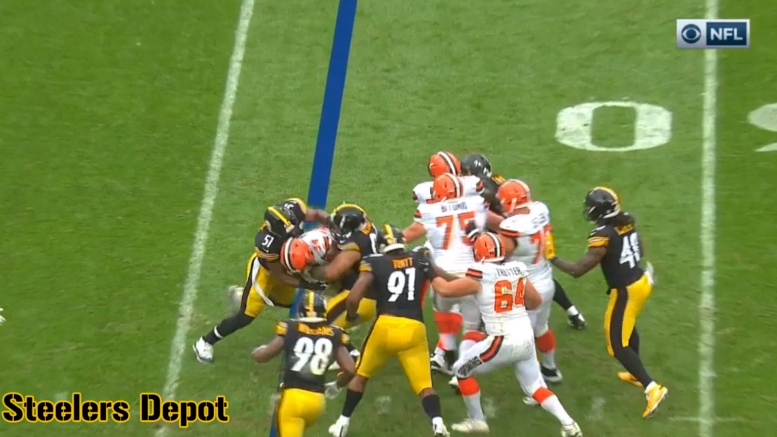 Jon Bostic entered his first start with the Pittsburgh Steelers facing a legion of skeptics, but he came out of the game having shown himself to be one of the team’s better defenders on the field on that day. While it might be surprising to hear given the Cleveland Browns’ rushing statistics—much of which admittedly came from quarterback scrambles and are not the subject of this film session—his particular strength was playing the run, which I hope to show through the following examples.

Playing the run well as a linebacker doesn’t necessarily mean making the tackle on the play. Vince Williams recorded 12 tackles on the day, but he missed a few run fits that helped contribute to some of the Browns’ bigger runs of the day.

Sometimes you make the play without making the tackle. On this second-and-seven run in the first quarter, Bostic’s ability to punch through the C Gap forced Carlos Hyde to bounce his run out to the right, where he was bottled up by three defenders.

In the second quarter, the veteran did get the chance to make the play, and if you’ll notice, it’s in very similar circumstances. Once again, he was able to shoot through the C Gap, but the rookie Nick Chubb was slow to adjust and went down for a loss.

Later in the same quarter—and credit to Anthony Chickillo for setting the edge here—Bostic and Tyson Alualu merely had to keep with the flow of the play in allowing Hyde to filter into the only hole left open that was going forward. Still, he was held for no gain on the play.

Into overtime, on a first-down run inside their own 20, the Browns ran it with Hyde, and Bostic nearly blew the play up by himself in the backfield, shooting the B Gap. He looked as though he had a shot at the back, though not a good one, but his efforts force Hyde to string it run out wide where he was forced out of bounds—from the far hash, no less—for no gain.

With the Browns looking to set themselves up for a better shot at what should have been a game-winning field goal, Bostic and Williams teamed up to drop Hyde for a loss of one. I like Bostic’s ability here to stay clean with David Njoku trying to reach him on the block from the slot, which allows him to stay in position to make the play.

Bostic also recorded a sack in the game and only allowed short gains in coverage, so he’s off to a good start. The Kansas City Chiefs next week will be another test, but if he continues to play this way, then the team is in good shape at his spot.