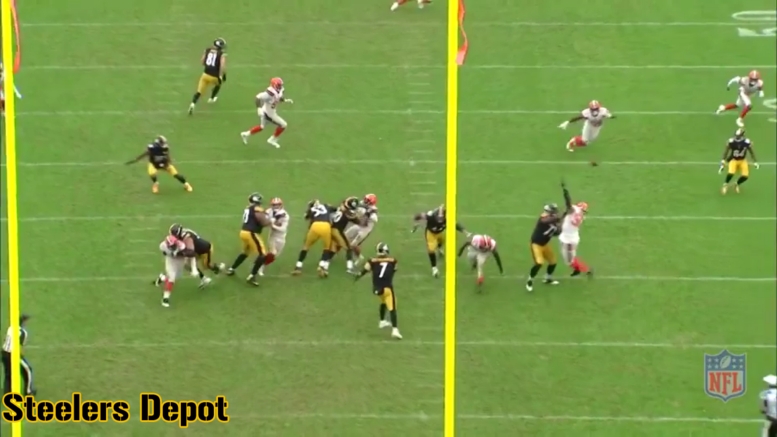 Pittsburgh Steelers running back James Conner made the first start of his career on Sunday, carrying the ball 31 times for 135 yards, and adding another 57 yards on five receptions. He totaled 192 yards from scrimmage and two touchdowns on 36 touches. And today I’m going to talk about his pass protection.

While I know that such topics as running back pass protection and special teams jammers are the bane of some fans’ existence, coverage of stuff such as that is frankly what makes us who were are, and differentiates us from other outlets. Not just for offering it, but for pointing out its value and importance.

The Steelers were not comfortable with where Conner was from an assignment and execution standpoint in pass protection during his rookie season, which is why he did not play more. He more than doubled his career touches in one game after playing in 14 a year ago. Now they trust him, and the body of work below is why.

Ben Roethlisberger had time to throw a deep ball—albeit an off-target one—to Justin Hunter in the middle of the first quarter. That is thanks in part to Conner picking up middle linebacker Joe Schobert on a blitz up the middle. The Browns stunted two players into the A Gap, but Maurkice Pouncey and Ramon Foster handled the tackle-end stunt and Conner picked up the blitzer.

At the end of the opening quarter, Roethlisberger was able to buy time to find Jesse James down the right sideline for a big gain. Why? Thanks, in part, to the same reason as the last play. Schobert blitzed up the middle again, with Conner picking him up. He needs to work on his leverage, the linebacker able to stand him up too easily, and Schobert eventually got away, but this was enough for the situation.

At the end of the third quarter, Roethlisberger and Antonio Brown connected on a crosser for 19 yards. Meanwhile, Conner met face to face with Christian Kirksey, getting an extended edition of the backs on backers drill. Again, he gets stood up a little, but holds his ground better than the last play.

This play below is more compelling from an assignment than execution standpoint, but assignment soundness is half the battle—or more—in pass protection. Similar to the first play, there is a tackle-end stunt right in his face, but this time the blitz comes from around the edge. Conner identifies his man and seals him off, though the throw was already out by then.

One play later, Derrick Kindred had the not so great idea of coming in on a safety blitz through the A Gap. Conner came up to meet him in the hole and put him on his backside, with a little help from Pouncey.

Into overtime, it was the second-year back and Schobert once again. This time the linebacker tried to swim through rather than bulrush. While it initially appeared to be a good idea, he overestimated how much space he had to maneuver in, and stumbled over a tangle of feet, Conner finishing the job to put him on his back.

Or course Roethlisberger got sacked anyway. But overall, it was a good debut for the Pitt product as a pass protector after getting just one live rep at it all of last season—in which he allowed a pressure that led to an interception. And he will get better and more comfortable as the games go on.