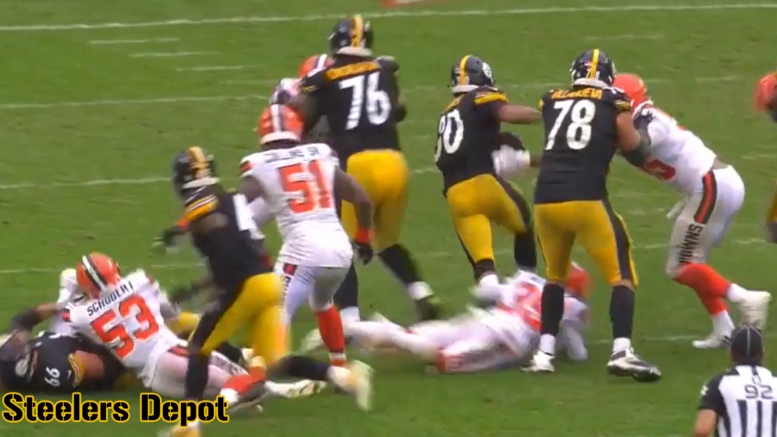 With the Pittsburgh Steelers missing their top tight end last week in Vance McDonald, the team improvised as they often have by making extensive use of the tackle-eligible role. This year’s tackle-eligible is rookie Chukwuma Okorafor.

The third-round pick actually technically was a starter during the game, as the Steelers opened out of 13 personnel, using him on the field as one of the tight ends. He played 17 snaps in all, primarily out of the 22 formation with Xavier Grimble and Roosevelt Nix on the field.

But let’s start at the beginning. On the opening play of the game, the first play of the season, Okorafor was in the game. Who would have predicted this when he was drafted? Lined up to the right of Marcus Gilbert, he chipped down on the tackle before picking up Joe Schobert at the second level.

The tackle-eligible took a back seat for the most part after that until the second half, but it saw good life on the Steelers’ opening scoring drive. That included James Conner’s 22-yard touchdown run, on which he was able to get a piece of Christian Kirksey down the field.

This time, Kirksey was smarter. On the following drive, the linebacker jumped outside of Okorafor’s range before cutting back around him. While he was not credited with a tackle on the play, he did get by his man.

In the fourth quarter, the Steelers brought the 22 package on the field and ran a quarterback sneak. The rookie was able to get good push against his defenders—the key to short-yardage success, even if he was on the perimeter.

On a later run with the Steelers backed up in their own end, Okorafor was actually one of the few blockers able to hold his own, going against Myles Garrett. Had a free rusher not been in that central gap, Conner may have taken it around his inside shoulder.

Then there was the Conner fumble. Garrett made the play from behind after Alejandro Villanueva whiffed on an ineffective chop, but credit to Okorafor for executing his assignment here against Kirksey to seal him off.

There were some less impressive reps than these mixed in, but overall it was a very encouraging debut for the 21-year-old offensive lineman. There’s still so much for him to learn, so for him to be able to contribute in this capacity already is a definite score.