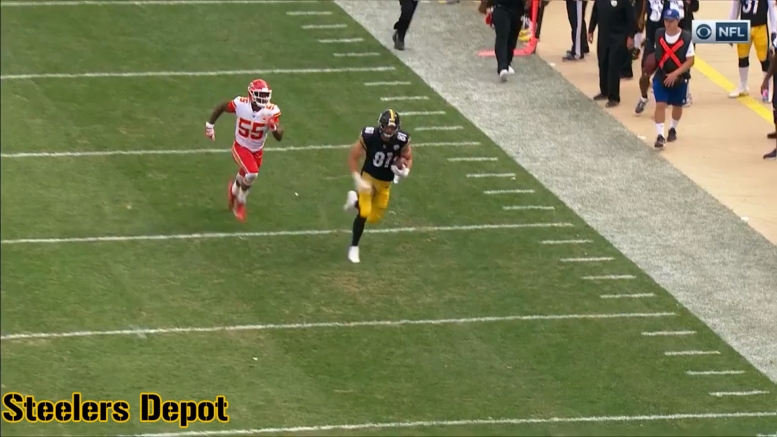 The Pittsburgh Steelers have had a difficult time connecting on deep passes, and producing explosive plays through the air, over the course of the first two weeks of the regular season. Quarterback Ben Roethlisberger’s accuracy on the deep pass has been lacking.

A surprising producer of explosive plays has suddenly been fourth-year tight end Jesse James, who recorded four receptions of 20 yards or more on Sunday against the Kansas City Chiefs. He is currently tied for fifth in the league with DeSean Jackson for the most explosive plays through the air on the season, and one of 30 players with a reception of 40 yards or more.

But those explosive plays were not scripted. That is not to belittle them, but rather to pay a compliment to the veteran tight end’s work in building a rapport with Roethlisberger and gaining a feel for what he is expected to do when the immediate reads are unsuccessful.

Take his first of the game, a 26-yard touchdown pass early in the second quarter. Coming from the right side, when he saw Roethlisberger pull the ball down, he broke to the left side of the field, running to open space. The quarterback was able to loft the ball into a vacated zone for the score.

The only planned explosive play that James had was next on the list. Against a blitz, the tight end flashed hot and quickly turned up the field for 20 yards.

Late in the second quarter, Roethlisberger was able to find James once against for 32 yards. On second and 10 with under two minutes to play, there was nothing initially open for the quarterback. It took Roethlisberger about seven seconds before he actually got rid of the ball, finding James breaking free from coverage for the big gain across midfield.

But James wasn’t done, saving the best for last. Late in the fourth quarter, the pair connected on a 46-yard gain. Roethlisberger was flushed out of the pocket, rolling to his left. When the tight end saw this, he turned upfield, working up the sideline, where the quarterback found him running free for a career-long gain.

You don’t need to have elite speed or any one particular athletic trait to be able to make big plays, to which this game for James attests. If you know what your quarterback is doing, and what your defenders are not, you can make an impact.