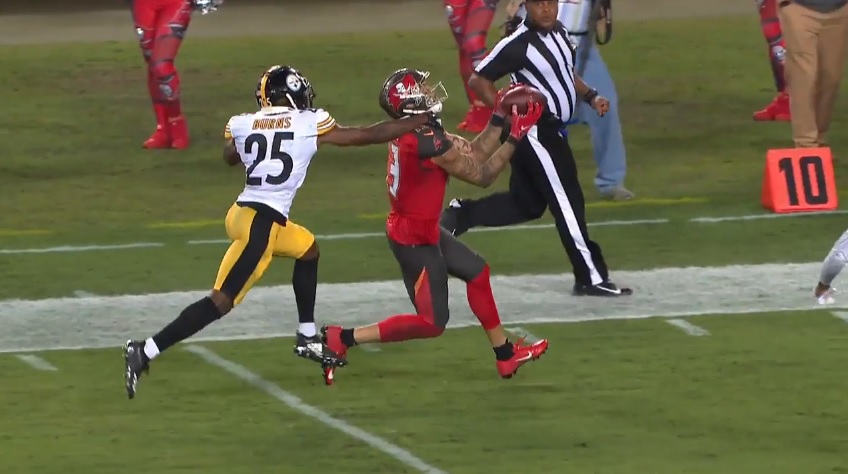 The Pittsburgh Steelers are searching long and hard for a starting cornerback opposite Joe Haden. Monday night definitely didn’t provide any clear answers and in reality, made the situation more of a mess. It doesn’t take a football junkie to know Artie Burns and Coty Sensabaugh struggled versus the Tampa Bay Buccaneers.

Based off the weekly charting I do, when targeted, Burns and Sensabaugh allowed 10 receptions on 13 targets for 194 yards and two touchdowns against Ryan Fitzpatrick. That’s nearly a perfect passer rating and objectively, terrible numbers. You, uh, probably didn’t need me to tell you that.

But I’m just as interested into the why they struggled. As is often the case in the NFL, the difference between a completion and not is razor thin. Burns and Sensabaugh’s struggles at the catch point was that difference, little technique things that made the night as ugly as it turned out. A couple examples.

Sensabaugh’s touchdown he allowed to Chris Godwin in the 4th quarter is the most egregious of the three I’m going to show. Not much you have to even explain with this one. He’s simply not playing the catch point. Godwin leaps up for the football, attacks it at its highest point, but Sensabaugh doesn’t. Instead, he looks to tackle him and – I guess – hope that creates the incompletion as Godwin goes to the ground. 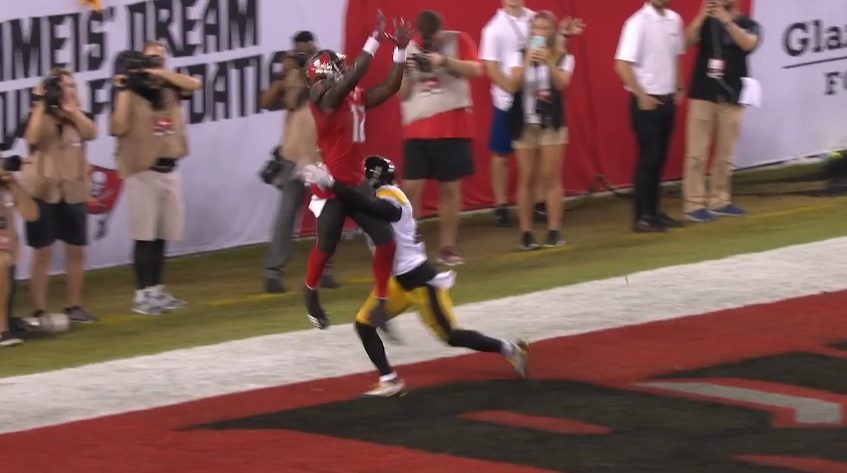 It doesn’t and it’s an easy, uncontested four yard touchdown. I get Sensabaugh trying to recover after losing in the route early but still, this is ugly tape. Read the eyes of the receiver. He’ll tell you when and where the football is.

Similar happens to Sensabaugh on a 3rd and long here. Steelers are playing 2 Man – or “55” as Dick LeBeau would call it – which is man coverage underneath with two safeties over the top. Corners play anything underneath and in-breaking, while the safeties are responsible for anything vertical.

Mike Evans runs a curl past the sticks, which Sensabaugh should have covered the whole way. But he isn’t facing the football as Fitzpatrick throws it and doesn’t contest the throw. It’s a completion that shouldn’t have ever happened. Maybe a bit tougher play than on the surface because his back is turned, but this play just can’t happen. 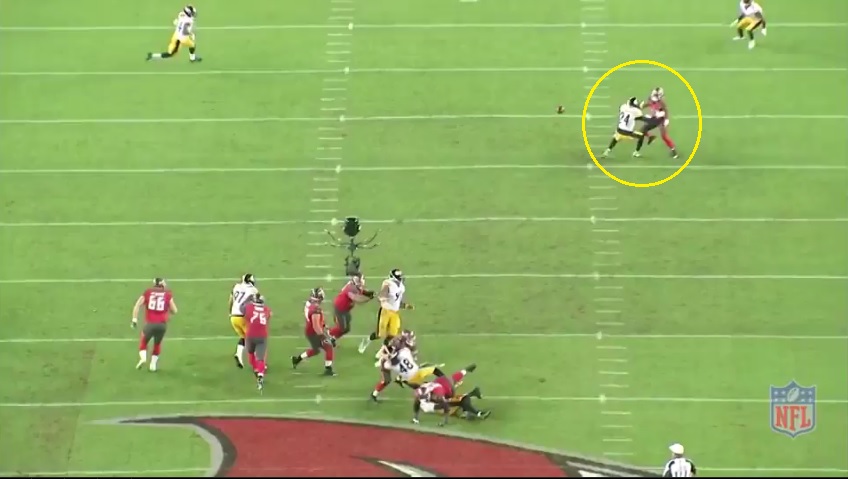 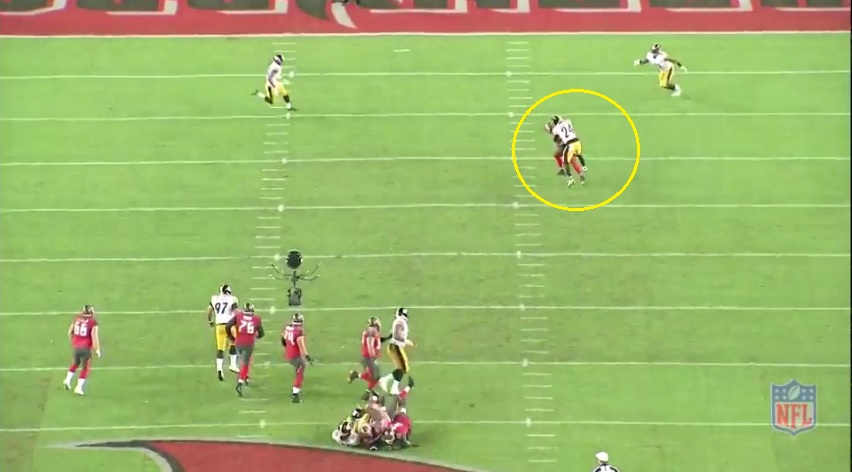 And a TV look at the catch point. Credit to the receiver for shielding his body but again, an uncontested catch in man coverage. Can’t happen. 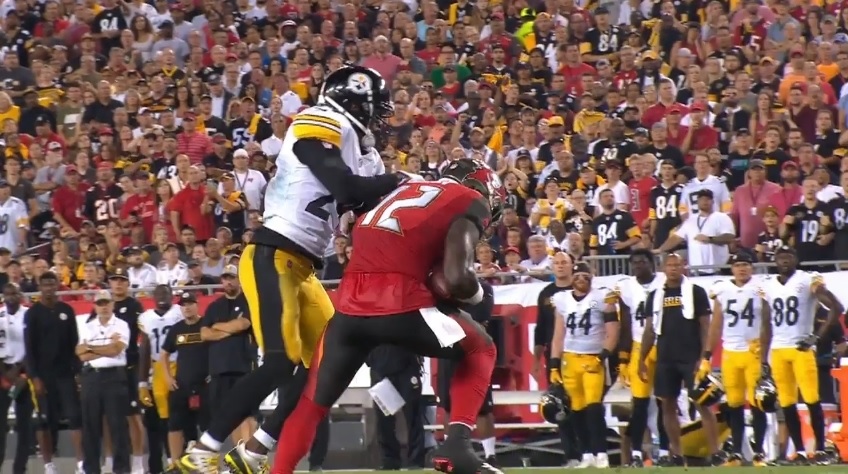 Finally, we’re looking at Artie Burns 51 yard completion allowed to Evans down the left sideline. Burns’ coverage here against Evans isn’t terrible, maybe a little late fully opening up his hips to turn and run, but he’s in decent position. But Burns gets himself out-of-phase looking back for the football and can’t finish the play at the catch point.

He’s just pulling on the back of Evans’ jersey, a penalty if anything, and the receiver is free to make the grab before Terrell Edmunds comes over and closes the gap. 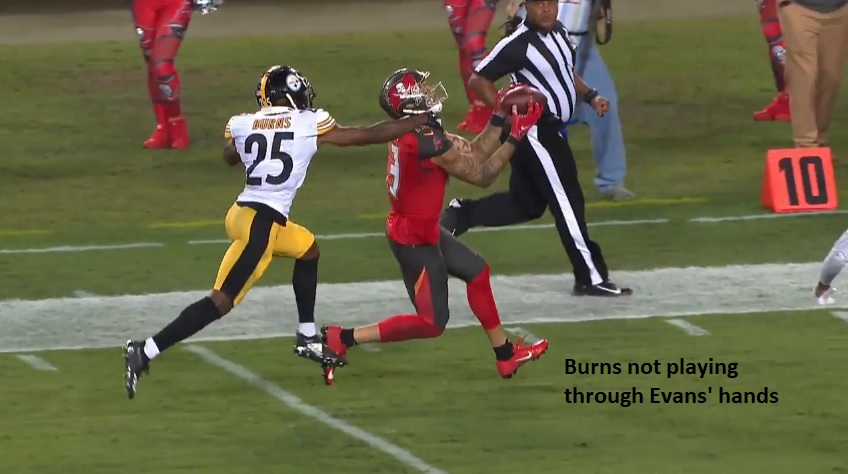 Gotta be better than that. This could’ve been an incompletion. Burns can play through the hands of the receiver, punch down hard on the hand/elbow of Evans, and separate his hands, which creates an incompletion. Burns simply isn’t playing as physical in coverage as his size suggests and it’s too easy of a grab.

Let’s contrast that with an example of how to play the catch point. It comes from, surprise, surprise, Joe Haden, who played well versus the Buccaneers. He breaks up this 3rd and goal throw to Godwin over the middle, a critical play in a 23-7 game right before halftime. Bucs kick the field goal, Steelers respond by marching down the field and find the end zone before halftime.

Godwin runs a dig towards the back of the end zone. Good ball placement from Fitzpatrick, definitely a catchable ball. But Haden subtly plays it really well.

Watch how Haden uses both hands to disrupt the catch. Left hand in front of Godwin to try to deflect it and failing at that (which he does) partially obstruct the receiver’s view of the football. The right hand comes around the other side to play down through Godwin’s elbow (attacking a joint that can move). Chop down on the arm, grab it, and then pull it away, separating the hands and creating the incompletion. 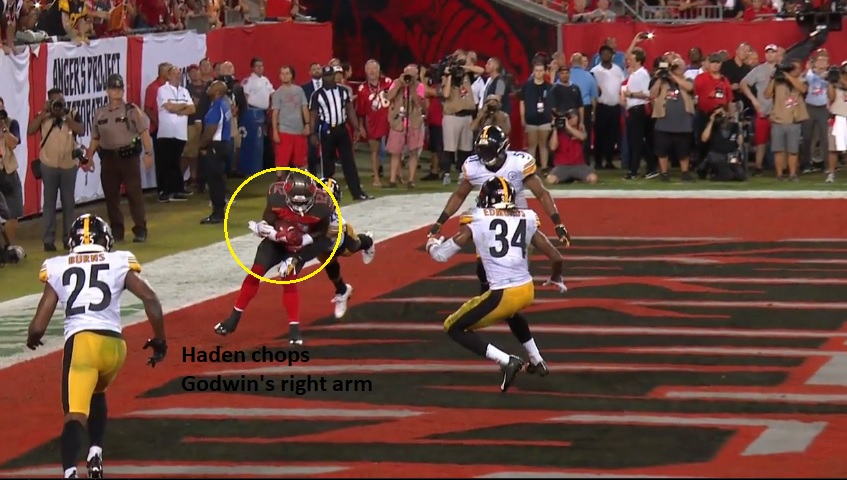 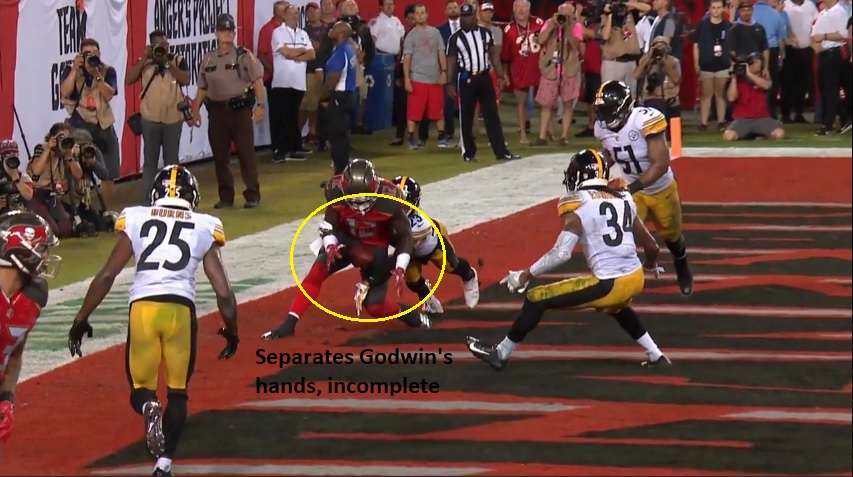 And here’s the whole thing. This is how it’s done. Really pay close attention to Haden’s right hand around Godwin.

Doesn’t take a lot to impact the catch point. Not everything has to look like a Mike Tyson punch. Create a little disruption and you can create the incompletion.

The good news is that these problems are solvable with technique. The bad news is that I’m not sure how much it’s going to change with Artie Burns and Coty Sensabaugh, two established players in the league. But it’s one step to solving the woes plaguing the secondary. And why things turned ugly Monday night.