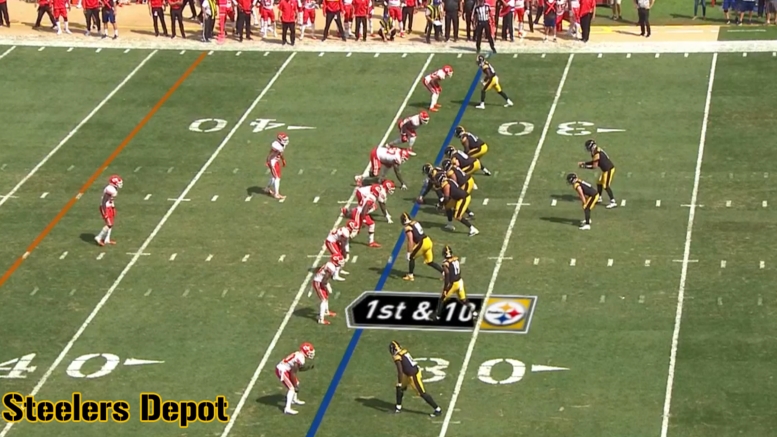 One thing that I was very interested to see coming into Sunday’s game on the offensive side of the ball was whether or not that Pittsburgh Steelers intended to extend their usage of the four-receiver look that they showed in the regular season opener. They used this a decent amount in last season’s opener before allowing it to trail off.

In Week Two of this season, however, usage of the package continued to be fairly prominent. In fact, the majority of an entire drive was dedicated to it, the Steelers running out of 01 personnel—one tight end, no running backs—on six consecutive plays. Let’s take a look at those six plays below.

The entire sequence takes up about three and a half minutes play playing time, starting about three minutes into the second quarter. On the start of the drive from the 15, Ryan Switzer started out in the sidecar before kicking to the right slot. The Chiefs only rushed three, but Ben Roethlisberger saw the pocket collapse and settled underneath to JuJu Smith-Schuster for four. The defender on Vance McDonald further downfield tripped, leaving him open for what would have been a big gain.

They ran a 2×2 split on second down with McDonald in a tight end alignment, Switzer stacked under Antonio Brown. Again facing a three-man rush—this time better handled—Roethlisberger hit Switzer in the right corner for 14 yards and a new set of downs.

A play later, it was Switzer in the sidecar again, the targets in a 3×1 alignment. Switzer got the handoff as he squeezed through a narrow crease for six yards. His first carry of the game saw him lose a yard after he was hit in the backfield earlier in the game, but he had a successful run in Week One too.

Now looking at second and four, Switzer stayed in next to Roethlisberger, Jesse James checking in, tight end alignment inside to the left of a 2×1 split. The Chiefs showed blitz, so Switzer checked to the right slot and Roethlisberger threw hot, beating the blitz to hit James in open space for 20 yards, traveling 44 yards in four plays.

With a new set of downs on the Chiefs’ 41, the offense showed five wide in a 2×3 split, the Chiefs showing a more conservative front. As on the first play of the drive, it was Smith-Schuster over the middle, who this time worked his way to the sideline for nine yards to set up a second and one. 53 yards in five plays, from the 15 to their opponents’ 32.

Then on second and one, Roethlisberger tested out the deep ball, looking for rookie James Washington down the right sideline. It was the designed play all along, Roethlisberger first looking off the single-high safety, but Washington struggled to get behind the defense, and the ball ended up tapping out of bounds.

The offense checked into 11 personnel for third and one, bringing James Conner on the field to offer the run threat, but they ended up converting on a bubble screen to Brown anyway. Still, I was pleasantly relieved to see the 01 package function well as a proof of concept on this drive, demonstrating that it can be a viable and sustainable personnel grouping.