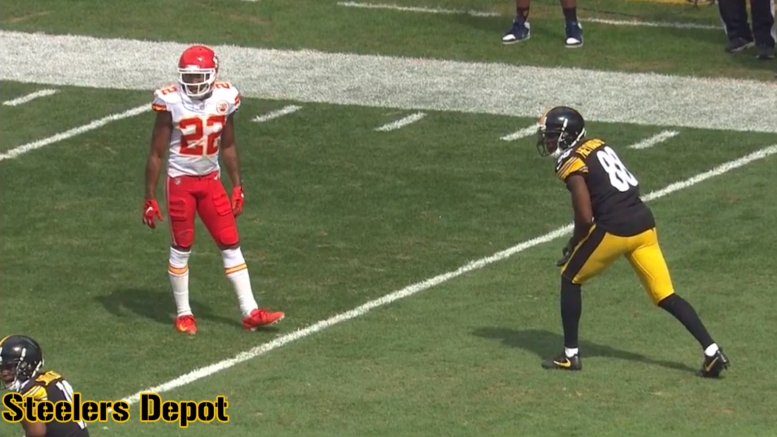 The Pittsburgh Steelers may have not dressed Justin Hunter for Sunday’s game against the Kansas City Chiefs, but that doesn’t mean they limited themselves to using just four wide receivers. In the season opener, Darrius Heyward-Bey played just one snap, used in the victory formation to close out the first half.

In their last game, however, he played slightly more, and actually got used. While he didn’t receive any targets nor touch the ball in general, the Steelers made use of his blocking talents to good effect, which was in contrast to the season opener.

A year ago, the Steelers used Heyward-Bey at times when they went to 22 personnel, using only one wide receiver, when they were fully committing to the run with no bluffs. He was the blocking receiver. But in the opener, they used Antonio Brown on the field despite using this package extensively.

They only ran the package a couple of times on Sunday, but they used him on one of them—and of course they ended up throwing the ball, Roosevelt Nix getting a wheel route for a 20-yard gain. Heyward-Bey helped to clear the way down the right sideline for the big fullback.

The veteran wide receiver was also on the field—instead of Brown—on third and one when the Steelers ran that shovel pass play to JuJu Smith-Schuster, preferring Heyward-Bey’s ability to block in that critical situation. He did not actually throw a block, however, on the play.

Earlier in the game, back in the second quarter, he actually got a three-play stint as the number three receiver with Brown and Smith-Schuster. James Washington played the vast majority of the game, but Heyward-Bey and even Ryan Switzer got some work in that department in three-receiver sets.

All three of those plays were passes, two of them going for completions of 11 yards. Both were on balls thrown behind the line of scrimmage, and the latter benefitted from Heyward-Bey’s blocking.

The man doesn’t get a lot of respect outside of the locker room—and is regularly pushed off the roster by eager fans who disregard his ability to make a significant impact on special teams and in the locker room—but he wouldn’t be on the roster five years later if his teammates and coaches didn’t appreciate what he brings week in and week out.

Even when he doesn’t get any opportunities to play. But if the Steelers only dress five wide receivers, rather than six, it’s more likely that there will be the occasional chances for Heyward-Bey to get some snaps on offense, even if it is in a specialist role as a blocker.

And I think most of us know he can run a mean end-around or chase down an interception to prevent a score.