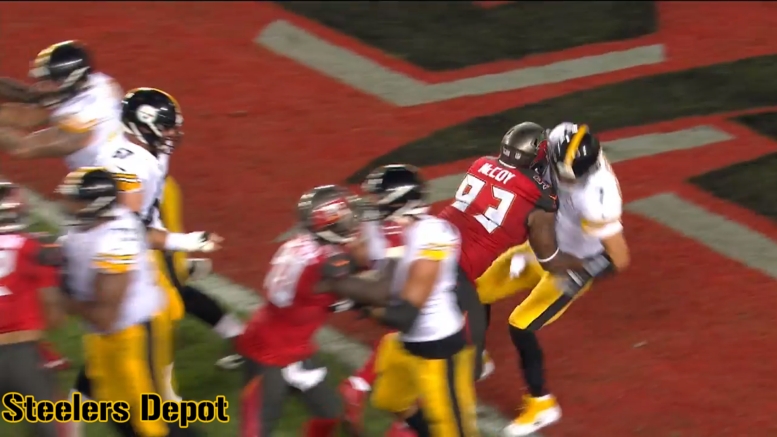 If you told Roger Goodell back in May that the biggest controversy that he league would face in September was roughing the passer penalties, I can assure you that he would gladly take it. Still, that is apparently that the NFL is currently under fire for the most, a trend that will continue after there were four roughing the passer penalties called in the first half.

They went both ways, the first two going against the Tampa Bay Buccaneers for Gerald McCoy and Jason Pierre-Paul. The Pittsburgh Steelers responded with roughing penalties against Stephon Tuitt and Sean Davis.

We have seen roughing penalties from many games this season get heavily criticized, and even a number of quarterbacks have come out to say that they feel as though the rule is going too far, now that the ‘all or most of the body weight’ clause is being enforced as a point of emphasis, which seemed to be in play at least on Tuitt’s roughing penalty, and possibly Davis’ as well. Neither applied to the Buccaneers’, however.

Roethlisberger was asked about the roughing the passer penalties after the game, in response to which he bemusedly replied, “there was a lot of them”. But he was hesitant to speak up much about how the rule is being officiated, as other quarterbacks have done.

“You know, I don’t want to criticize officiating, especially when you’re talking about a penalty that helps the quarterback out, but I was surprised at the first one”, he admitted, referring to the penalty on McCoy.

On the play, the perennial Pro Bowl defender beat right guard B.J. Finney inside, getting a clear shot at Roethlisberger after he released the ball, a deep completion, lowering and leading with his helmet into the quarterback, but he kept his feet as he knocked Roethlisberger down.

“The second one I thought was legit”, the quarterback said of Pierre-Paul’s, in which the veteran defensive end squarely made contact with Roethlisberger’s helmet using his right hand. “He hit me in the helmet. It was kind of like hearing that loud ring when your helmet gets hit. But there sure are a lot of them. I can’t imagine the fans at home are enjoying them too much”.

Later on, a reporter jokingly asked him if he knew that the rule had gotten so far when even he was getting roughing calls. “Finally”, he responded with a laugh. Many big-bodied quarterbacks for years have been frustrated about not getting roughing calls, but the new rule enforcement seems to have evened that playing field.