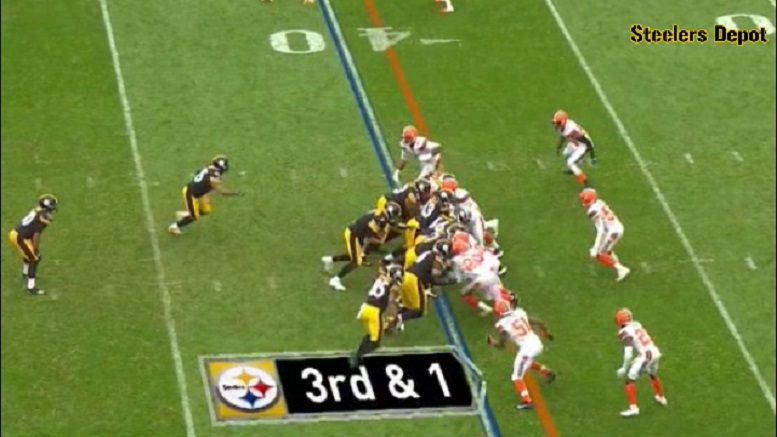 In case you missed the Pittsburgh Steelers Sunday game against the Cleveland Browns, it included quarterback Ben Roethlisberger doing something he hasn’t done in a game in quite a while, a quarterback sneak. Roethlisberger’s quarterback sneak came on a 3rd and 1 from the Browns 40 yard-line with 14:09 left in the fourth quarter and you can see the play below.

During his Tuesday morning interview on 93.7 The Fan, Roethlisberger was asked about Sunday’s quarterback sneak and if it was meant to be a small jab at Browns offensive coordinator Todd Haley, formerly of the Steelers

“I don’t think so,” Roethlisberger said. “It was called from the sideline. I went over there, and they called the play, there was no discussing it. They called it, we talked about all week in practice, too, that if they [the Browns defense] gave a specific look that we would have it. And we’ve talked about on this show before that I’ve never been opposed to the sneak, I’ve done it with pretty high success in the past. So, hey, we’re one for one. We should keep a little tally this year.”

Not long after discussing Sunday’s quarterback sneak on Tuesday, Roethlisberger was again asked about Haley and if he got a chance to talk to the Steelers former offensive coordinator before or after the game.

“After, briefly, as I was out the field talking to their quarterback and he was there and just kind of told him, ‘Good job, congrats’ and it was just a very quick talk,” Roethlisberger said. “There was so many people out there that I didn’t get a chance to have a long conversation but just a quick talk.”

All the fuss about Roethlisberger’s quarterback sneaks and their relation to Haley are most likely a result of the Steelers former offensive coordinator deciding against a sneak on two different 4th and 1 situations during last season’s playoff loss to the Jacksonville Jaguars. In fact, Roethlisberger had hinted a few days later during a radio interview that while he was certainly open to quarterback sneaking in short-yardage situations, he didn’t have the ability under Haley to audible to such a play call.

“That’s over my head,” Roethlisberger said this past January.

Prior to Roethlisberger’s Sunday quarterback sneak against the Browns, one must go all the way back to the Steelers 2015 Week 12 road loss to the Seattle Seahawks to find the last time he attempted one. In fact, Roethlisberger attempted a quarterback sneak twice in that game in the second quarter and both were successful. That game, however, also included the Steelers quarterback removing himself from that contest in the fourth quarter due to him experiencing concussion-like symptoms.

Will we see more quarterback sneaking this season from Roethlisberger moving forward? I’ll bet that we do, and I bet Haley would bet that way as well.