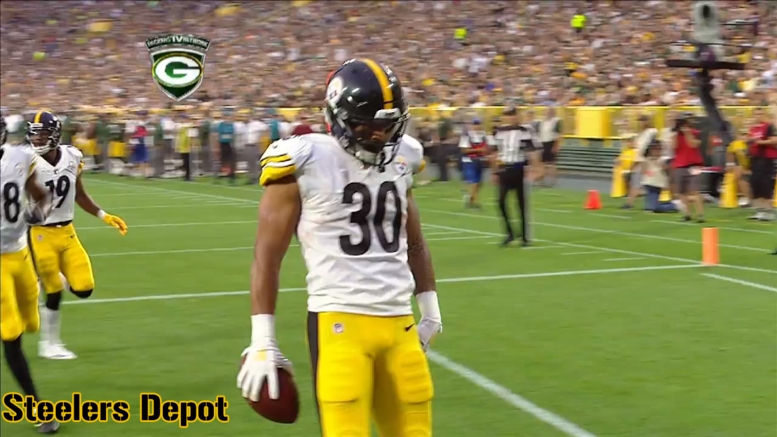 For as much frustration as there is in the Pittsburgh Steelers’ locker room over the absence of one running back, there is an equal amount of excitement about the presence of another. Second-year James Conner is expected to shoulder the bulk of the load in the absence of the other running back in question, and his teammates are not only behind him, they believe in him.

That’s not something that he takes for granted for a second. Out of one side of their mouths, the offensive linemen admonished their otherwise-starting running back for his decision-making over the past few days, but out of the other, they laid praise upon the man who only has a couple dozen carries in his NFL career.

As his teammates talked him up voluntarily over the course of the day, specifically the offensive linemen, he told Aditi Kinkhabwala, “that’s who you most want respect from, the guys blocking for you”. The linemen have previously expressed a fondness for blocking in front of Conner’s aggressive, one-cut running style.

As Maurkice Pouncey addressed the absence of the other running back, he said, “we’ll move on as a team” before volunteering, “Conner looks great”. He added later in answer to a separate question, “Conner’s ready, he’s been here busting his butt. A football team ain’t defined off one person”.

In the absence of their starting running back, however, the Steelers are hoping to have the rest of the first-team offense out there. Left guard Ramon Foster seems to be well on track to returning. James Washington was a full participant yesterday. Tight end Vance McDonald practiced for the first time in about a month, though he was limited. As long as he feels good today, he should be on track to play.

And with the rest of the offense moving full-throttle, they certainly should be able to function with Conner in the backfield leading a three-headed attack with rookie Jaylen Samuels, who can also work out of the slot, and veteran Stevan Ridley, who had success rushing against the Cleveland Browns last season.

Roethlisberger is not typically forthcoming with his praise for young players—though he did encourage the team to draft Conner a year ago—but he talked the second-year back up quite a bit in his comments to the media yesterday, expressing his confidence in the unit moving forward with him.

“James is a year better than he was last year at this time”, he told reporters. “I think we are all kind of excited for what he can bring to this offense, this team. We’ve got a lot of weapons. We’d like to have [the other running back] out there, but we’ve got guys who can make plays for us”.

Roethlisberger particularly complimented the work that Conner has put in on improving in the passing game, noting that “he has worked a lot on his hands”. He caught seven passes for 61 yards during the preseason, most of that coming in the less than one off of work he played with the first-team offense in the third game.