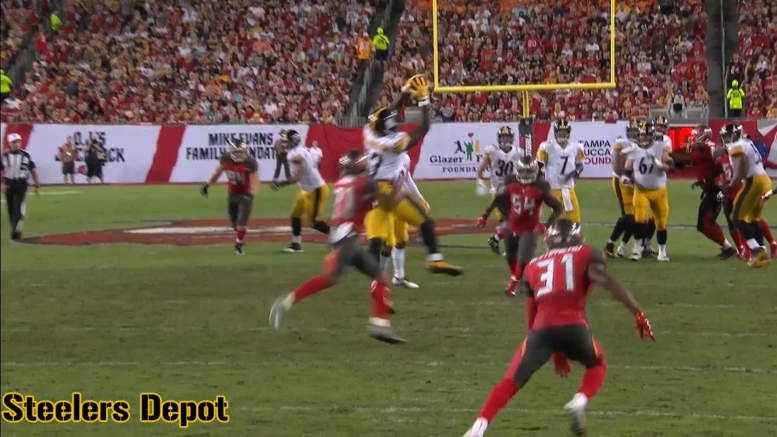 It was around this time last year that then-rookie wide receiver JuJu Smith-Schuster was just beginning to emerge as a 20-year-old threat for the Pittsburgh Steelers. The second-round pick his currently third in the league in receiving yards behind Michael Thomas and Mike Evans, so you can say that he is progressing nicely.

This year, it’s rookie James Washington who is making that incremental progression—only, thanks to Smith-Schuster, his ceiling will not be as high. The latter was able to take over the number two role from Martavis Bryant in 2017, but Washington can only hope to contribute as the number three behind him and Antonio Brown.

That doesn’t mean he can’t make significant contributions, and he had his first multiple-catch game of his career last night, coming up with two big catches on third down for Ben Roethlisberger, who lavished praise on him after the game:

“Those big third downs were in the middle of the field. I think everyone kind of thought, anticipated he’s going to be an outside guy, but I moved him around a little bit—we’re doing a lot of no-huddle there—and moving him and JuJu on the inside. And for him to find those inside breaking routes and big-body catches—you talk about JuJu in there knowing how to use his body and be physical—I thought James did a great job of that tonight, making those big-time catches, holding onto the ball while he’s getting hit. That’s growth. That’s what we want to see and what we need to continue to use him in different ways.

The Steelers looked at Washington coming out as a player who shared a lot of commonalities with Smith-Schuster. Both are big-bodied, physical wide receivers who are faster than they seem and are willing to make the tough catches and throw blocks. The 2018 second-round pick is beginning to show that in meaningful games.

Roethlisberger targeted Washington five times last week—officially, with seven targets in all—but only came to him twice last night. However, he came up to make the play on both occasions. He erred in his recollection of both catches being on third down, though that narrative was led by the reporter asking the question.

His first reception was actually on first and 10, but it came during the two-minute drive at the end of the first half, and it was a significant play that put them inside the 20-yard line and led to them scoring. Later, in the third quarter, he came up with a 12-yard reception, again on a contested pass, to convert on third and four.

Unfortunately, Chris Boswell would go on to miss a 47-yard field goal at the end of that drive. But that’s the topic for another article. In the meantime, let’s just appreciate the positive progress that the rookie wide receiver is making in the midst of Brown and Smith-Schuster, now with three catches on the year for 39 yards and a touchdown.