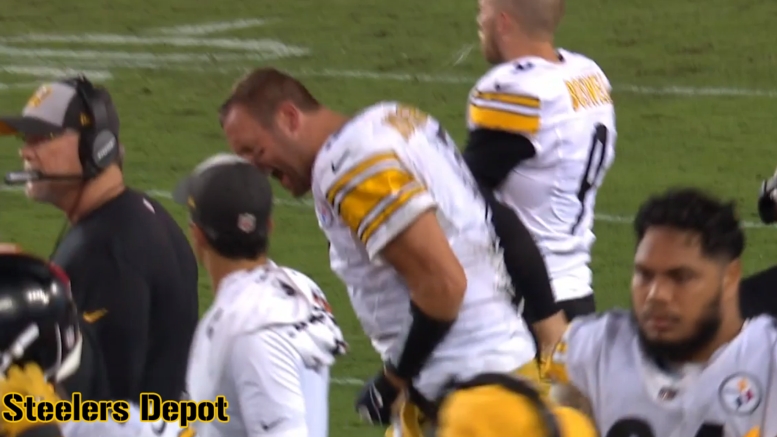 It’s been impossible to hide the fact that the Pittsburgh Steelers offense has not been in sync as they are when they are at their best. The reason for this is because the connection between quarterback Ben Roethlisberger and star wide receiver Antonio Brown has not been there as it normally has.

While the two did connect on six of the nine official targets that Roethlisberger threw in Brown’s direction—and drew a pass interference on a 10th—those six receptions only yielded 50 yards, more than half of which came on one great bubble screen for a 27-yard touchdown, which was an individual effort on the receiver’s part.

His other five receptions combined for a whopping 23 yards, and Roethlisberger’s three targets in his direction in the second half all fell incomplete. That included a notable deep ball that went to Brown’s back shoulder toward the sideline on third and nine at the Tampa Bay Buccaneers’ 36-yard line with 3:26 to play.

The two were clearly not on the same page on the play, and Roethlisberger vented his frustrations about it on the sideline in a way that clearly indicated that he felt it was on Brown. But he offered a mea culpa in his comments after the game.

As he came out to address the media, he issued the following remark before fielding any questions: “I’d like to start this off by just apologizing to Antonio Brown for showing a little bit too much emotion on that last third-down pass to him. So I’d like to just say I apologize to him for that”.

This came just a week after Brown was highly criticized for taking his frustrations out on coaches and teammates on the sidelines, caught on camera at different times showing his temper toward wide receivers coach Darryl Drake and later at offensive coordinator Randy Fichtner.

Brown had been under fire for most of the regular season for this issue or that, and has already apologized. But he seemed largely at peace tonight despite not getting a lot of touches (by his standards) and being shut out in the second half.

He told reporters last week that his frustration was a product of the team losing. The Steelers didn’t spend a lot of time trailing last night, and once they took the lead they never relinquished it, even while they made it interesting.

Roethlisberger understands that he is the leader of the offense, a captain of the team in general, and his behavior reflects on the team as a whole, and influences them and their conduct. He is clearly taking an approach that differs from Tom Brady in New England.

I’m going to guess that many will say there was a passive-aggressive intent behind Roethlisberger’s apology. I honestly don’t really care. It was far from necessary, but a meaningful gesture all the same, especially considering Mike Tomlin has only just found the locker room. You don’t want to lose it again so quickly.