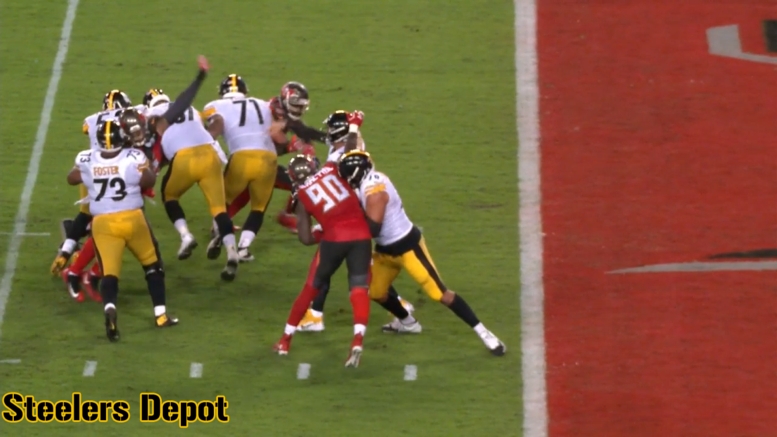 The NFL’s stringent officiating of the roughing the passer penalty has been under a microscope so far this year after a number of high-profile plays have drawn criticism and questions as to how the defender could have made the play any differently. Clay Matthews in particular has been penalized three times this season in three games.

There was no game that more prominently displayed the varieties in the roughing the passer penalty than the Pittsburgh Steelers’s Monday Night victory over the Tampa Bay Buccaneers, during which four penalties were called, all in the first half. They were evenly divided between both teams, and included hits that were questioned on either side.

Arguably the clearest penalty was Jason Pierre-Paul’s. The veteran defensive end pushed left tackle Alejandro Villanueva back into the pocket and raised his right arm in an attempt to swat at the ball, but ended up hitting quarterback Ben Roethlisberger in the helmet.

It wasn’t that hard, but it was certainly enough to qualify as an infraction by the letter of the law and extended beyond mere incidental contact. Still, Roethlisberger admitted yesterday that he embellished the severity of the impact the blow had on him, falling to the ground.

He spoke about it while he was on the radio on Tuesday, defending himself against accusations that he ‘flopped’. “He’s got that cast on his hand, and the hand that he’s got that cast on is the one that hit my helmet. So it rung me a little bit”, he said.

He did add, “I might’ve went to the ground a little bit to sell it, but it definitely got me. So I think that’s a good call”. On Monday night after the game, he did say that he wasn’t entirely sure why the first roughing penalty he drew against Gerald McCoy was called.

An article on Roethlisberger’s comments from the league’s website raises concerns about the fact that he said that he tried to sell the call and wondered if that might encourage others to do the same. In my opinion, that expresses an obliviousness to the reality that that has always happened. Players have always sold things in order to get a proper call—though sometimes they sell things to get a call that isn’t justified as well.

I have absolutely no problem with a player falling to the ground after getting hit in the head in order to ensure that the officials see what happened, or anything that is of a comparable circumstance. If the penalty occurred, then it should be called, no matter what ultimately draws the flag out of the pocket, and there’s nothing saying that Roethlisberger’s going to the ground is why the hit was penalized.