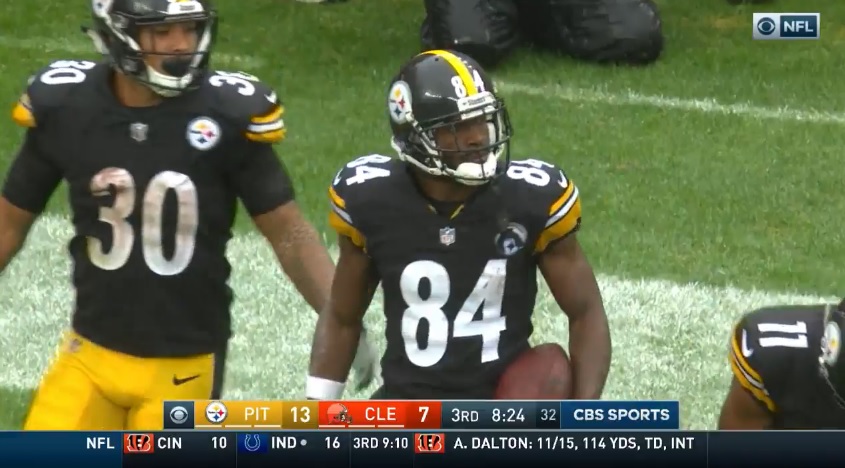 Pittsburgh Steelers wide receiver Antonio Brown had yet another interesting session with the media on Thursday and it included him answering questions related to his Monday absence, the discipline he received from head coach Mike Tomlin, his actions on the sideline and on the field during Sunday’s loss to the Kansas City Chiefs in addition to his Monday tweet to a former member of the team’s public relations department that sarcastically suggested the team should trade him

As far as he ‘trade me” tweet, Brown admitted Thursday he needs to not allow himself to get baited into making social media comments such as that in the future.

“Obviously I don’t want to be traded. I’m still grateful to put on my uniform, grateful to be part of this organization,” Brown said Thursday, according to Ed Bouchette of the Pittsburgh-Post Gazette. “I don’t take it for granted. Obviously it was a stupid remark online. I just got to stay away from online and the distractions.”

Brown also attempted to clarify on Thursday what it was that led to him seemingly having a very animated sideline discussion with Steelers offensive coordinator Randy Fichtner and wide receivers coach Darryl Drake in the fourth quarter of Sunday’s loss to the Chiefs.

“We were losing the game. We haven’t won a game yet. I’m not on the sideline begging for the ball or making statements that you guys (say I) make. I’m pissed off. We’re losing. We suck,” Brown said per Bouchette.

As far as Brown’s absence on Monday, he said on Thursday that a personal reason was behind that and that the team was contacted ahead of time and informed he would not be present. While Tomlin said after the team’s Wednesday practice that he had met with Brown and that some sort of discipline had been given out to the wide receiver, Brown wouldn’t disclose Thursday what was said and what the discipline he received was.

Whatever discipline Brown received from Tomlin, it apparently doesn’t revolve around him missing playing time Monday night in the Steelers road game against the Tampa Bay Buccaneers.

“Why wouldn’t I be? You don’t want to see me in my jersey?” Brown said Thursday in response to him being asked if he expects to be on the field for the first snap Monday night against the Buccaneers, according to Joe Rutter of the Pittsburgh Tribune-Review.

Brown’s Thursday media also included him taking issue with how they portray him as well. This is a continuation of sorts of him thinking the media has it out for him and that was perhaps most evident on Thursday when he was asked if he’s currently limited in any way by some sort of injury.