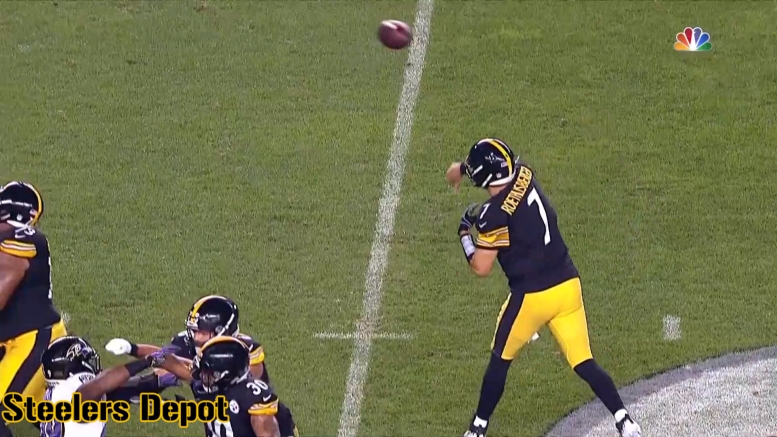 It wasn’t too far from this point a year ago when Pittsburgh Steelers quarterback Ben Roethlisberger jokingly opined after throwing five interceptions that perhaps he doesn’t ‘have it’ anymore. He didn’t go that route this time after last night’s rough game, simply acknowledging his poor play and vowing to move on and play better going forward.

He will have to, because last night’s showing was certainly not good enough. He only completed 57 percent of his passes, 27 of 47 attempts, managing just 274 yards for his efforts, a season-low. He did throw one touchdown—ironically, to Brown—but he also threw a critical late interception. He averaged under six yards per pass attempt.

Last night was the fifth time in his NFL career in which he fired off at least 45 pass attempts without reaching 300 passing yards. Unsurprisingly, one of the previous four games also came against the Baltimore Ravens, in 2016, a 21-14 loss in which he threw for 264 yards on 45 attempts with one touchdown and one interception.

This is the second week in a row in which he has largely disappeared in the second half of the game. He has clearly been at his best so far this year in the second quarter for whatever reason, getting off to slow starts and extended slow finishes after the teams come out of the locker rooms following the halftime break.

For whatever the reason, Roethlisberger is almost as often a part of the problem as he is the solution. This needs to be “just a bad day at the office”, because, frankly, the team is not going to stay afloat without him playing at a Pro Bowl level.