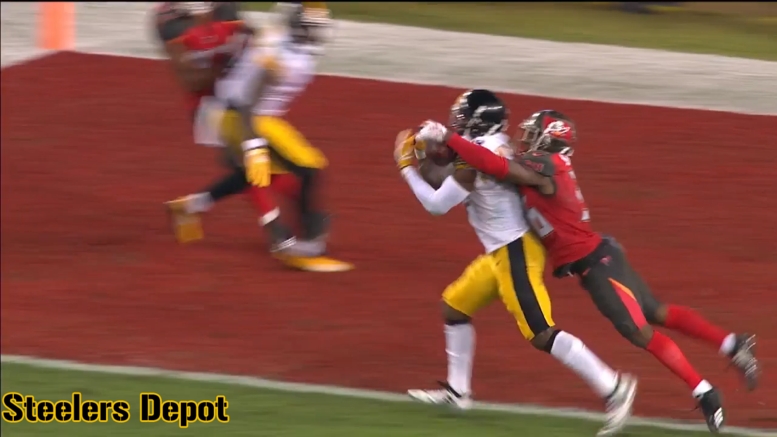 The Pittsburgh Steelers have been generally pretty clean so far this year in terms of holding on to the football in the passing game. There have only been four passes through three weeks that I have considered drops, and that includes one from Monday night.

That play came with 17 seconds left in the first half with the Steelers facing first and goal from the two-yard line. JuJu Smith-Schuster was unable to handle a Ben Roethlisberger pass as he ran along the goal line, bobbling the ball, and by the time he was able to try to double-clutch it, the trailing cornerback playing at his hip was able to get a hand in and knock it away.

I consider this a drop because of the bobble, even though the defender eventually was able to put a hand on the ball. Had he not bobbled it initially, he most likely makes the catch. Fortunately, Ryan Switzer caught a touchdown two plays later—also bobbling it initially, but he had nobody on his hip.

There are a couple of other plays worth talking about in the game from a passer-catch standpoint that are not drops, at least by my standards. An Antonio Brown target in the third quarter fell incomplete even though he seemed to get his hands on it.

However, the degree of difficulty in making his play from such an angle is so great that it can’t be considered a drop. In addition to that, the quality of angle available from the broadcast or coaches tape is such that I can’t satisfactorily conclude that he or the ball were not interfered with at some point.

This final example is clearly and obviously not a drop, which you’ll understand immediately when you look at it. The target in question never even made an attempt to catch the ball. But I wanted to talk about it here—one, to take up some space—but also to highlight the delicate nature involved in many passes.

So much of the passing game is predicated upon human relationships. Roethlisberger and James Conner are still fairly new in terms of working together, particularly when it concerns in-game circumstances. We’ve seen the two not entirely on the same page on a few occasions already this year.

Here, Roethlisberger was expecting Conner to turn and look for the ball much sooner than he did. He was also expecting a tighter route that would have taken him further toward the sideline by the time the throw arrived. It’s a relationship that has to be grown through trial and error.