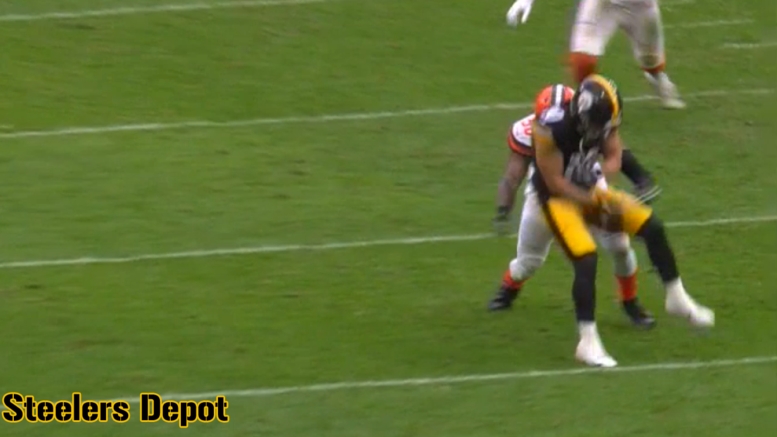 We try to get a little more expansive in our coverage every year on this site, hoping to bring you things that you are not going to find on other sites. Whether it’s a report on missed tackles or charting notes from our own personal data that we collect by hand, we like to think that we provide a valuable service to the Pittsburgh Steelers fanbase when we’re at our best.

One thing that we are introducing this season is a dropped pass report. Drops are not an official statistic, similar to missed tackles and sacks allowed, so they are not something that is going to show up on a player’s resume, which is why they are important to talk about.

There’s always going to be an element of subjectivity involved, and I’m sure there will be some debate in some weeks about what passes were drops, and that’s fine. In the season opener, I made note of two passes that I classified as drops.

The first drop came early in the game, about midway through the first quarter. The Steelers were looking at a second and nine approaching midfield, breaking out a four-receiver set for the first time this season.

Antonio Brown was stacked on top of Ryan Switzer on the short side of the field with Justin Hunter out wide opposite and JuJu Smith-Schuster in the slot inside of him. Jesse James was aligned in the sidecar next to Ben Roethlisberger.

Off the snap, Brown ran a corner route as Switzer looped inside on a curl, hooking back in front of the coverage. While he was quickly met by linebacker Christian Kirksey, the replay shows that the receiver already lost control of the football before contact was made.

While the drop set up a third and nine that the Steelers were unable to convert, the other one was far more costly. That one came from James toward the end of the first half on second and 10, coming on the cusp of field goal range.

James was the inside receiver on the right side of a 1×3 alignment off the snap, and gained a clear target after the two Browns in coverage blitzed on the play. While Roethlisberger’s pass was high and could have been placed better, it was a clear drop that ricocheted off the tall tight end’s hands for an interception. 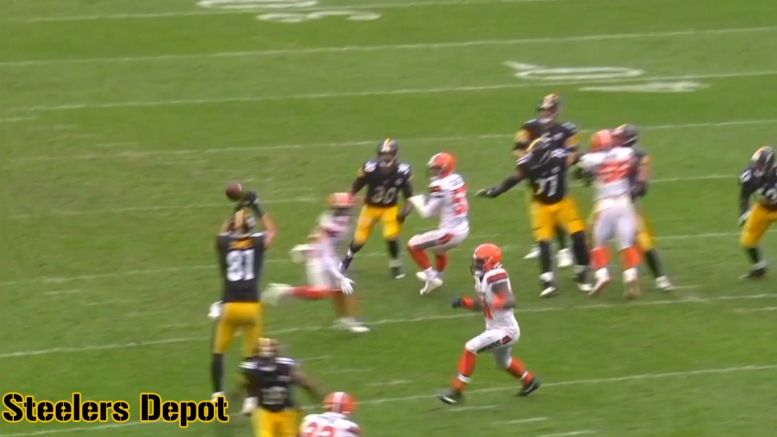 Denzel Ward picked off that pass and returned it 26 yards to the Steelers’ 45 with 42 seconds remaining in the half. Fortunately for Pittsburgh, Bud Dupree recorded a tackle for a six-yard loss and then a strip sack of Tyrod Taylor that would have set up a third and 24 had Cleveland chosen to run another play before the half ended.