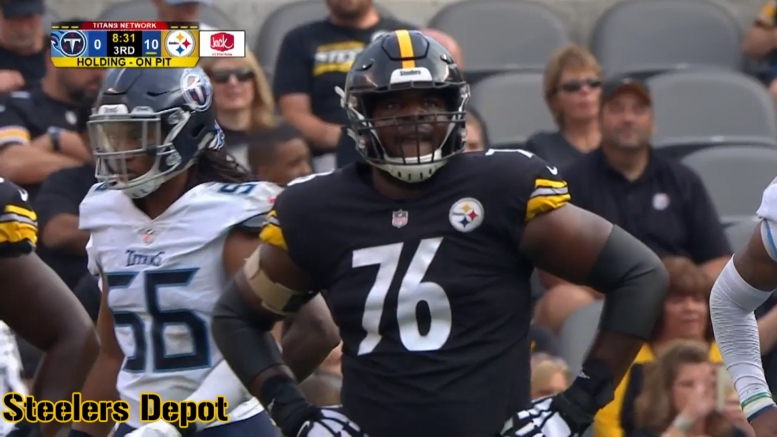 Question: Why is Chukwuma Okorafor being passed over in favor of Matt Feiler for consideration at right tackle?

The Steelers have spent the past week, evidently, practicing without right tackle Marcus Gilbert, whose hamstring seems to be acting up after logging about 170 snaps over the course of the first two weeks of the season.

So the team might have to do without him for the game, which means that somebody will be making a start at right tackle who hasn’t started there before. The Steelers made the decision that they were comfortable dressing rookie Chukwuma Okorafor as their swing tackle on game days, but appear to be preparing Matt Feiler to start if Gilbert does not go.

I struggle to make sense of this. Okorafor is the less versatile lineman of the two, with Feiler ostensibly able to play all five spots along the line. He also told reporters last year that he practiced in the tackle-eligible role despite not being used there in a game.

Yet they opted to dress Okorafor when the line was healthy, and leave Feiler as a healthy scratch. There certainly hasn’t been anything in the rookie’s game to indicate that he has not been performing well with the opportunities that he has been given. So why sit your swing tackle to start another player?

The only explanation that I can come up with is that they believe Feiler is better able to handle a full 70-plus snap affair than is Okorafor. And with Feiler’s attentions split between many different positions during a typical week, he doesn’t have the luxury of specialization.

With a full week to practice, however, only at right tackle, Mike Munchak and the coaching staff appear to believe Feiler is the better option than Okorafor. The second-year player has hardly seen work at tackle the past two years, but did end up as the swing tackle to begin last season after Jerald Hawkins until the second half of the year.

The only other thing that I can even think of is that the team wanted to give Okorafor snaps inside. If Feiler starts and B.J. Finney does as well, there are no interior reserves. Yes, Feiler would kick inside if anything were to happen to them, but the team prefers to have both of their gameday active reserves capable of moving inside.