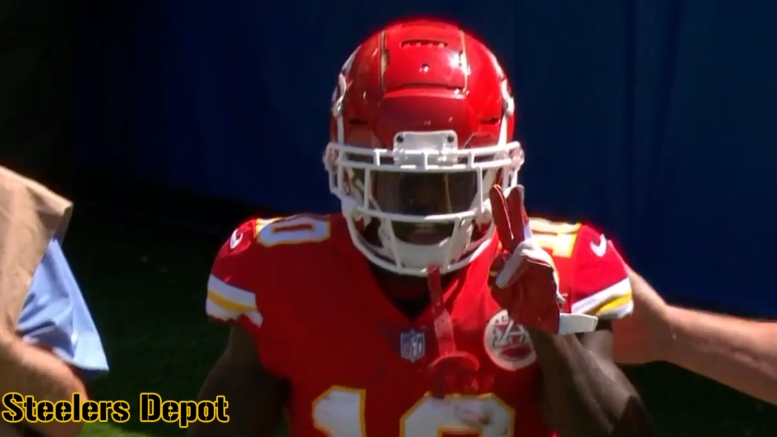 Question: Should the Steelers try to shadow Tyreek Hill with Artie Burns if Joe Haden sits?

Tyreek Hill has been making steady progress in turning himself from largely a gadget player into a legitimate number one wide receiver, and he was off to the races, almost literally, in the Kansas City Chiefs’ opener on Sunday, during which he raced through the Los Angeles Chargers’ admittedly injury-plagued secondary.

The secondary did a good job in the Steelers’ opener of limiting big plays through the air, but that was largely attributable to Tyrod Taylor’s unwillingness to pull the trigger on deep passes. He did find one deep connection late in the game against Joe Haden’s injury replacement, Cameron Sutton.

Should Haden miss the game, the Steelers may consider trying to use Artie Burns to follow Hill. Burns is their most athletic cornerback who stands the best chance of keeping up with the speedy wide receiver. While it would not be necessary to put Burns on Hill for every passing snap of the game, a light mixture of situational matching might be effective.

Year three is big for Burns, for obvious reasons. He is now at a point, both in his career and his life, in which he should be at a comfortable level professionally, entering his third season, and second as a full-time starter.

He said during the offseason that he viewed both himself and Haden as the team’s number one corners, making it unnecessary for them to move around. But if Haden is down, does the plan change? That could be up to Tom Bradley.