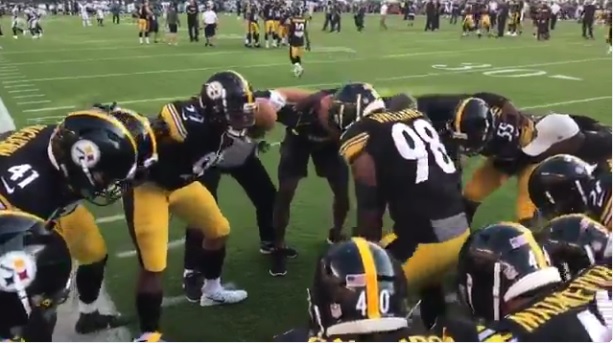 While much of the focus on Thursday will be what happened after kickoff, as it should be, what happened before was the most special part of the night. As you may have seen by now, Ryan Shazier, traveling with the team to Philadelphia, was part of the linebackers huddle before kickoff. Take a look.

Vince Williams, now the leader of the LB room, breaks the group down.

After the game, Williams made a short video for the team’s Twitter account, reminding us Shake ‘n Bake, the nicknames for he and Shazier, is still going strong.

Great start to the preseason. pic.twitter.com/toOPG92bXN

During this years Friday Night Lights practice, he publicly walked unassisted for the first time, not needing his cane as he made his way across the width of the football field to a thunderous applause from the 10,000 in the stands. He later did a lap around the track.

Shazier has been pulled out for all of 2018 but he and the team haven’t ruled out a 2019 or beyond return to football. Previously, Shazier has expressed a desire to make it back to the NFL. By all accounts, his progress has been remarkable.