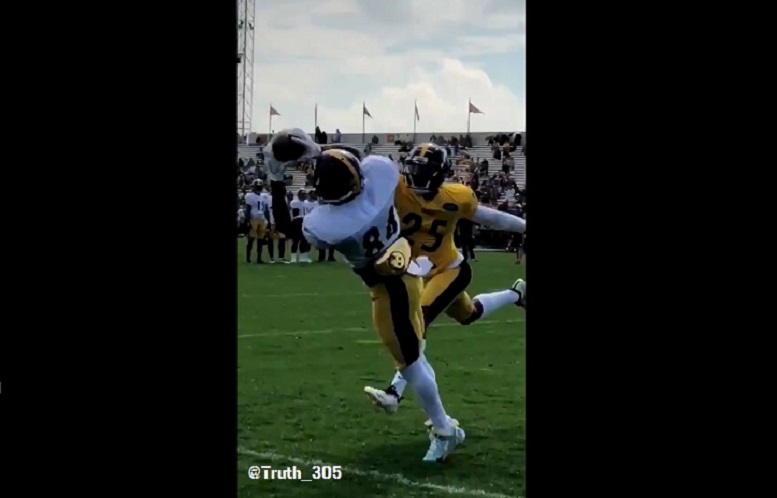 Pittsburgh Steelers wide receiver Antonio Brown certainly wasn’t sporting any kind of limp during the team’s Tuesday training camp practice at Latrobe Memorial Stadium. In fact, the ‘Madden NFL 19’ Cover Athlete made a spectacular catch during the session that will certainly remind you of the one former Steelers wide receiver Santonio Holmes made late in Super Bowl XLIII.

As you can see in the video below that was posted on Twitter by @Truth_305, Brown manages to catch the perfectly thrown football right near the edge of the sideline of the end zone just like Holmes did against the Arizona Cardinals to effectively win Super Bowl XLIII.

AB with the Santonio Like TD catch in 1 on 1s Today pic.twitter.com/yRKWYIVie6

In case you’re curious if Brown got both feet down, I made a simultaneous split-screen gif of his hands and feet out of the video that posted on Twitter. Just like with Holmes several years ago, this one looks like it is a good touchdown.

I made this simultaneous slo-mo split screen of @AB84's catch out of the video posted a little while ago by @Truth_305 #Steelers pic.twitter.com/QUoOM4lLSA