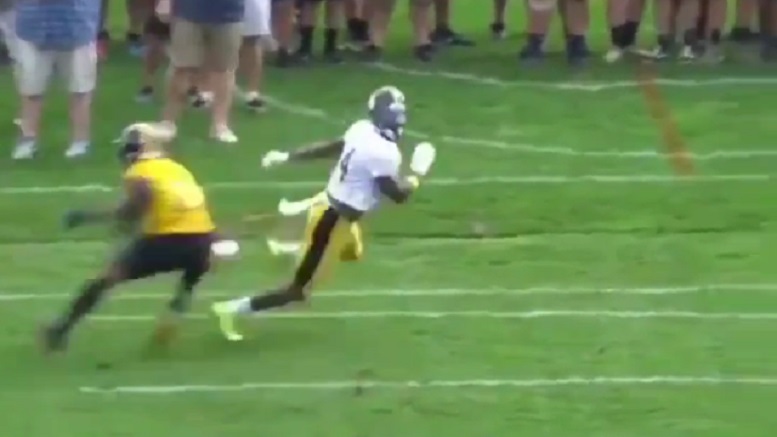 Remember about a week ago when quite a few people were seriously concerned that Pittsburgh Steelers wide receiver Antonio Brown may have suffered a very serious lower body injury and perhaps wasn’t as day-to-day as head coach Mike Tomlin said that he was? Even him laying low on his social media accounts just about a week ago was interpreted by one sports disc jockey as something being more serious with Brown injury-wise than the team was willing to say. Well, on Saturday, Brown returned to practicing fully again with his teammates and I think it’s safe to safe that he’s over the quad/hip flexor injury that was ailing him and is much better now.

During Saturday’s training camp practice, Brown lined up against Steelers cornerback Joe Haden deep inside the red zone on the left side of the formation and then proceeded to put a double-move on him that resulted in him being wide-open in the end zone by at least five yards. A quick catch and toe tap by Tony Toe Tap resulted in an easy touchdown.

The route starts off looking like it might be an end zone corner fade and Brown sells it well by looking back at the quarterback. He then begins his short-area double move by sticking his right foot in the ground and following that with an abrupt left turn. Haden thinks he might have this out-route undercut but as he looks back for the football, Brown sticks his left foot in the ground and cuts back vertical, leaving the veteran cornerback in his wake.

The original version of the fan-shot video at full speed is obviously very impressive. However, the zoomed and slowed down version of Brown’s lower body that I quickly produced from the original video shows you just how good of footwork Brown has. I’m going to go out on a limb and say that Brown is now a little bit better than day-to-day with his previous injury. Haden, on the other hand, might be suffering from some strained pride Sunday morning.

#Steelers @AB84 even makes you shake your head in slo-mo pic.twitter.com/q4ltiWckHn