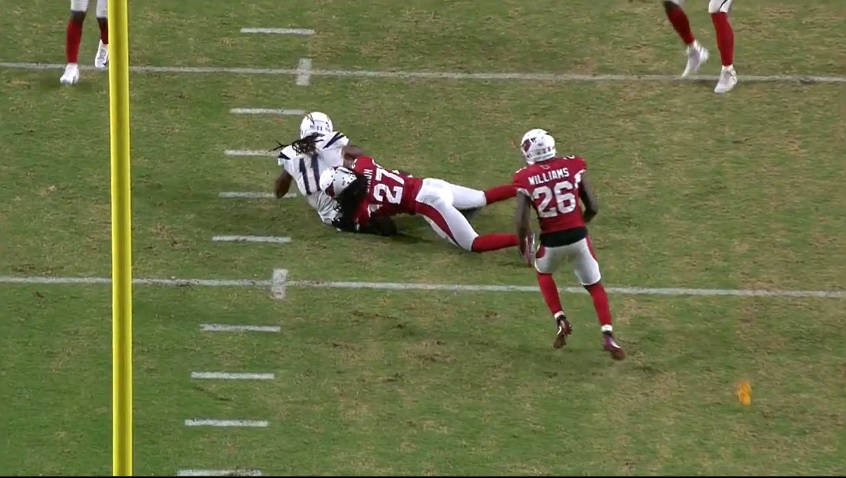 Last week, I asked if the NFL was going to ruin defenses.

Yes. Yes they are.

The league is still having trouble working through their new, hastily put together helmet-to-helmet rules. That’s evident based on some of the unbelievable calls made on the field during the first week of the preseason. Perhaps none have been more confounding than the flag officials threw on Arizona Cardinals safety Travell Dixon. Take a look.

Looks like a perfect form tackle, head up, lead with the shoulder, wrap up, etc.

This is now a penalty in the NFL. pic.twitter.com/vvTTngvBac

If THAT’s going to be a penalty, then there’s no way defenses have a chance this year. And every fan knew it. Ryan Clark summed it up in his reaction.

1) I’d get kicked out of the league in the new NFL…. 2) I would teach this tackle over and over again. It’s just that perfect. He saw what he hit, didn’t launch, didn’t use the crown of the helmet, & wrapped to finish! Job well done ! Shame on you Mr. Ref! https://t.co/Ka6aDoiXk8

Here’s even Brian Hartline, a former receiver, critical of the new rules placed on the defense.

Textbook tackle is now a penalty in the @NFL 🤦🏻‍♂️ https://t.co/FR82SE1ZHd

Though technically anyone on the field can get called for lowering of the helmet, including the offense, it’s obvious that in bang-bang situations, it’s much more likely the defense is penalized.

From Matt Danely, here’s the defender getting flagged when the ball carrier clearly dropped his head.

Why is this a penalty on the defender? This is going to be a mess if the officials can’t even tell who dropped their head pic.twitter.com/lIEedJQoNt

It’s hard to put it all on the refs. They don’t have the benefit of slow-mo in the moment and yet they’re being asked to make this split section calls of who dropped their head first. A nearly impossible task, especially for a crew that just saw its most veterans officials retire.

I understand it’s only Week 1 of the preseason and hopefully thee are growing pains that sort themselves out when the games start to count. But I’m 100% certain at some point, to some team, a bad call on this new rule will be the deciding outcome in a game.