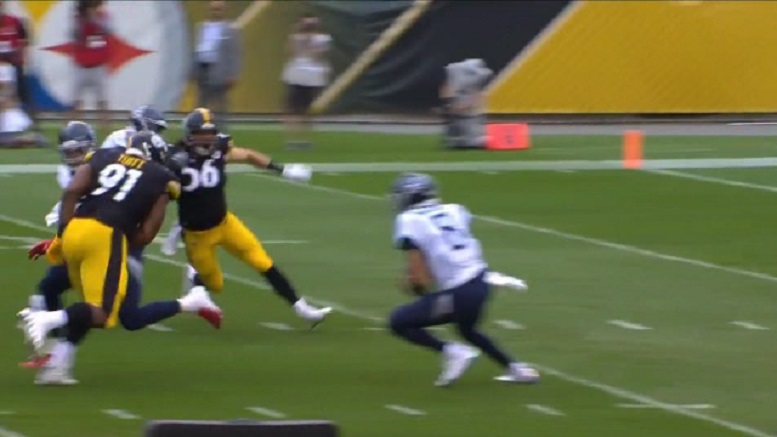 Just a few play into the 2017 regular season, Pittsburgh Steelers defensive end Stephon Tuitt suffered an injured biceps against the Cleveland Browns and that injury wound up keeping him from being at his best the rest of the year. Tuitt’s now over that injury and if you need any proof of that, just watch how he played in the Steelers Saturday home preseason tune-up game against the Tennessee Titans.

Tuitt, who would ultimately play 21 defensive snaps against the Titans, basically the entire first half, registered two tackles, a sack and two total hits on the quarterback during the game. His successful evening started early as he beat Titans right guard Josh Kline to the inside on the first defensive snap of the game. While Titans quarterback Marcus Mariota was able to get rid of the football to wide receiver Tajae Sharpe for a 12-yard gain, Tuitt registered a quick pressure and a hit on the Tennessee signal-caller to start off his evening.

While Tuitt just missed a sack on his first snap of the game, he didn’t on his second one. On this play, Tuitt went pretty much untouched around Kline to the guard’s right and once past him, Titans running back Derrick Henry made a business decision that benefited him, but not Mariota.

After registering a run stop tackle on the first play of the Titans second offensive possession of the game, Tuitt then proceeded to record his second hit on Mariota two plays later and on a 3rd down and 6. This time, however, Tuitt, who had lined up at right defensive end, beat Titans left tackle Taylor Lewan, a former first-round draft pick and already a two-time Pro Bowler, to the inside with a very athletic spin move. Tuitt was asked about that spin move after the game.

“That’s something I’ve been working on since I started camp – implementing some good inside moves,” Tuitt said, according to Gerry Dulac of the Pittsburgh Post-Gazette.

Tuitt, who signed a 5 year, $60 million contract extension with the Steelers a little less than a year ago, has yet to receive any postseason honors since being selected in the second-round of the 2014 NFL Draft out of Notre Dame. However, if he’s able to stay fully healthy this year and can start finishing a few more quarterback pressures with sacks, that could potentially change this season.

Based on what we observed from Tuitt Saturday against the Titans, he’s ready for this year’s regular season opener against the Browns and Steelers right guard David DeCastro agrees.

“It’s nice seeing him work on someone else like that,” said DeCastro, who goes against Tuitt in practice, according to Dulac. “He’s extremely talented. I know how good he is. It’s good to see him do what I know he’s capable of.”