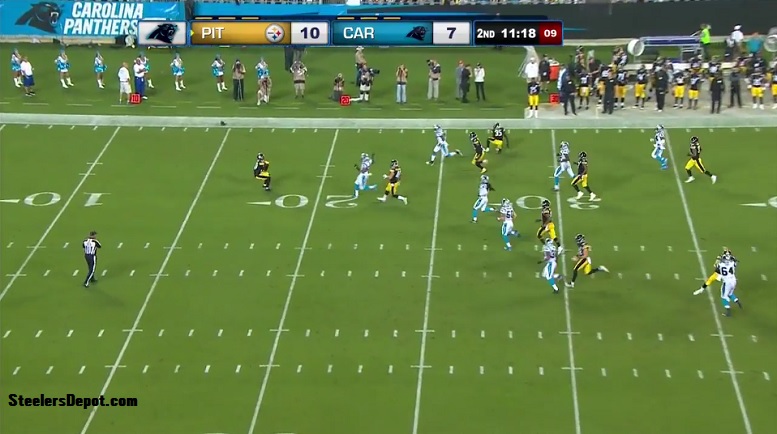 The Pittsburgh Steelers will play their second preseason game of 2018 Thursday night against the Green Bay Packers at historic Lambeau Field and it will be interesting to see all the lineup and rotation changes that transpire from their first exhibition game against the Philadelphia Eagles in all three phases of the game. As usual, special teams will have a lot of focus on it Thursday night against the Packers and when it comes to the Steelers return game, specifically, I’m hoping to see cornerback Cameron Sutton get a shot to show what he can do with a few punted footballs in his hands.

In the Steelers preseason opener against the Eagles, young wide receivers Quadree Henderson and Justin Thomas split the punt and kickoff return duties by half with the rookie undrafted free agent out of Pittsburgh going first. Neither, however, were able to provide any splash as in total, just four balls were able to be returned.

Quite honestly, neither Henderson nor Thomas have a very good shot at making the Steelers 53-man roster at this point and especially the latter. The former, Henderson, doesn’t have much, if any, value as a wide receiver to the Steelers right now and head coach Mike Tomlin once again made it clear this past week that the rookie really has a tough path ahead of him when it comes to his 53-man roster chances.

“I think return guys always force themselves on you,” Tomlin recently said during an interview on 93.7 The Fan when asked if Henderson needs to show he can not only return kicks and punts for the Steelers, but also show he can play receiver. “You’re never actually looking for them, they just run their way onto your football team. Stefan Logan ran his way onto our football team a number of years ago, so he’ll be given an opportunity to do that. That’s the chief means of him getting on the bus or making the football team. He knows that, we understand that. The other things supplement that effort.”

Based on what Tomlin said this past week about Henderson likely to get more opportunities to show off his return abilities moving forward into the preseason, it’s probably reasonable to expect him to get another look Thursday night against the Packers as a member of both the kickoff and punt return teams. I’m fine with that, but with that said, there’s really no real good reason to let Thomas have more opportunities against Green Bay. Instead of Thomas potentially reliving Henderson Thursday night as the punt returner, Tomlin should let Sutton be the one to do that, in my opinion.

For what it’s worth, Jacob Klinger of pennlive.com reported this past week that Sutton returned some punts during the team’s Sunday training camp practice. When asked about that, however, Tomlin downplayed it.

“He’s been working that since he’s been here. He’s always been a specialist. He did it at Tennessee. He returned both punts and kicks,” Tomlin said. “Nothing new there.”

Sutton, as I have already pointed out a few times in previous posts since he was selected in the third-round of the 2017 NFL Draft out of Tennessee, was a pretty good returner during his college career and especially when fully healthy. While the young cornerback only returned six punts at Tennessee for 32 yards during the 2016 season, that was likely a result of him missing several games with an ankle injury. Sutton did, however, return a total of 45 punts during his college career for 657 yards and four touchdowns. In fact, he even finished the 2015 season as the FBS’ leading punt returner with an average of 18.7 yards per return on 25 opportunities and two of those he returned for touchdowns. Additionally, his career punt return average of 14.6 yards is even slightly better than Henderson’s 13.4 at Pittsburgh.

In case you forgot, last year during the preseason, Sutton, who had battled a hamstring injury during his rookie training camp, was only afforded the opportunity to return one punt and that instance happened during the finale against the Carolina Panthers. That opportunity, however, resulted in a fair catch.

I get the fact that the first concern and focus Thursday night against the Packers with Sutton should be his defensive play. Even so, it still wouldn’t hurt to let him return a few punts on the unfrozen tundra of Lambeau Field just the same. Currently, Steelers wide receiver Antonio Brown is slated to be the team’s punt returner once again to start the season and if he winds up being the best man for that job, I won’t live in my fears of him retaining that role. However, it would be nice to see a player such as Sutton get a few opportunities to show what he can do as a punt returner at some point during these final three preseason games and even more so when you consider that wide receiver Eli Rogers, who has returned several punts already during his short time in Pittsburgh, will more than likely start the regular season on the Reserve PUP list.

In closing, I realize that the Steelers preseason depth charts aren’t worth the pen and internet ink used to produce them. Even so, why did Tomlin even decide to list Sutton as the team’s backup punt returner behind Brown at the start of the preseason if he doesn’t intend on letting him get a chance to return a few during the preseason? Will that change Thursday night against the Packers? We’ll have to wait and see and I hope it does.