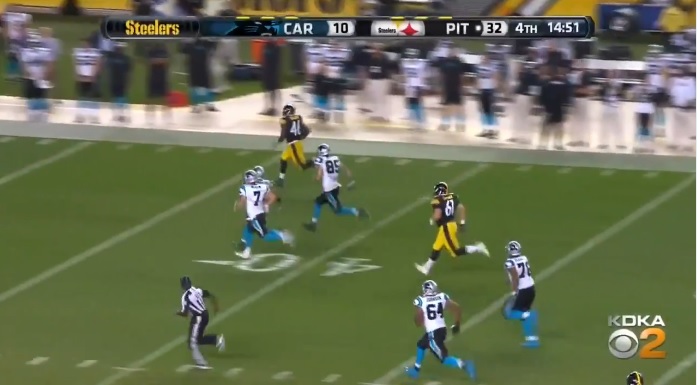 It’s clear that Pittsburgh Steelers rookie linebacker Matthew Thomas will make the team’s 53-man roster this year as the undrafted free agent out of Florida State capped off a nice preseason Thursday night with solid effort in the team’s 39-24 win over the Carolina Panthers.

Thomas not only led the Steelers defense in tackles Thursday night with 11, he also registered a strip sack and returned that loose football 75 yards to the Panthers one-yard line. After the game was over, Steelers head coach Mike Tomlin was asked about the training camp and preseason that Thomas put together this summer.

“I think he’s been continually on the rise in terms of his performance,” Tomlin said of Thomas. “He’s got some physical talent, he’s gained more detail throughout, he put a nice exclamation point on his efforts with a ridiculous splash play there in the second half of the football game.”

That will do, Matthew. That will do. #Steelers pic.twitter.com/7uViihJpwt

Thomas entered the Steelers preseason finale having registered 11 total tackles in the team’s first three games. He also added 3 total special teams tackles. He was asked to rush off the edge a few times during the preseason and did so effectively.

In the Steelers third preseason game against the Tennessee Titans, Thomas was on the field some with the first-team defense in a special personnel grouping designed with him in mind. Throughout the preseason we were able to see just how athletic Thomas really is and now you have to wonder if he’ll eventually take over as a starter at some point during his rookie season. Until that happens, he’s going to be very hard to keep off the field every week and thus we should expect him to see some limited amount of snaps on defense.