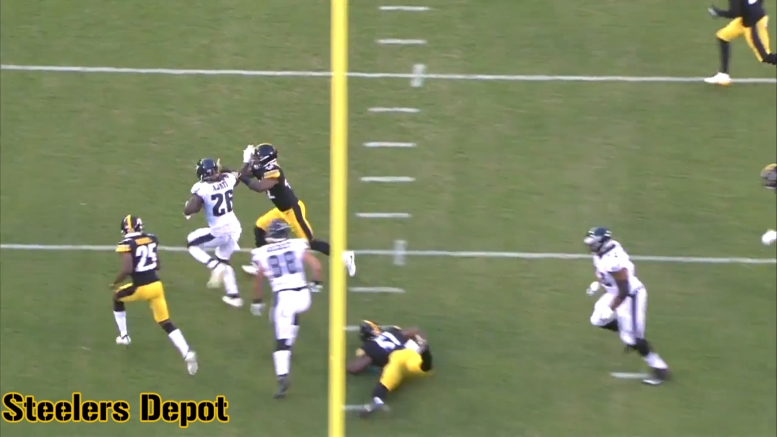 One of the Pittsburgh Steelers’ biggest problems on the defensive side of the ball last season was in their tackling ability, and the secondary was among the worst offenders there. That continued to be the case in the preseason opener last week, and new defensive backs coach Tom Bradley was not particularly happy about that even though his group picked off two passes.

“We got a couple of interceptions, but because it was the first game there also were a couple of hiccups that we have to work out”, he recently told the team’s website. “I was still a little disappointed in our tackling; we can do a better job there. But as far as our pass defense, I thought we played some things pretty well”.

The most prominent example of a missed tackle from the secondary during the game was from veteran Coty Sensabaugh, who in facing Corey Clement in a third-down situation was unable to make the tackle, which allowed the Eagles to convert to a new set of downs, and they would score a touchdown just a short time after that.

Bradley said that it is the “small things” that cause poor tackling. While he was quick to credit good offensive play for the proliferation of missed tackles (“the other team practices, too”), he said that the key to combating that is going “back to your fundamentals”.

“You have to make good contact, you have to move your feet because the opponent is bringing his feet, and another thing is you need to have a good base when you make a tackle”, Bradley said of the keys to making a good tackle. “If your feet are too close together when you’re trying to make a tackle you don’t bring anything and you’re going to get run over”.

Perhaps it’s worth noting that he specifically pointed to third-year cornerback Artie Burns as a player who has actively and consciously worked this offseason to improve his game in this area. “He made a real effort to improve his tackling, and he has had a fine camp so far”, Bradley said.

Burns has been one of the bigger concerns on the team with respect to tackling efficiency, though he certainly is not the only one. While he does occasionally display a willingness to be physical, there are other times that he seems to shy away from contact, though his bigger issue has always been assignment soundness.

It is imperative that players such as Burns and Sean Davis become more reliable tacklers at the back end of the defense for the Steelers if they hope to move forward and become not just one of the top units in the league, but a dominant group. And Bradley is going to keep getting on them until they get it right.