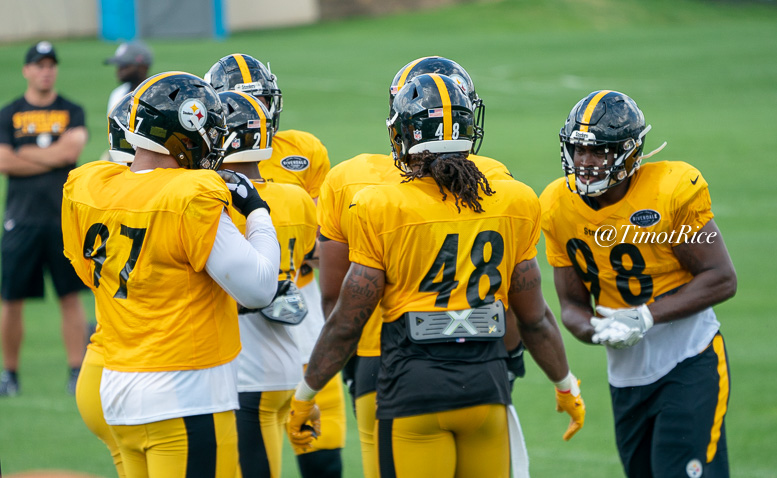 T.J. Watt hasn’t been able to do much this preseason. A left hamstring injury suffered on Day Three in camp has sidelined him ever since. One thing he’s been able to do? Watch fellow OLB Bud Dupree. Based on what he’s seen, Watt is impressed.

“Bud’s doing well,” Watt told reporters. “He’s been able to throw a lot of great pitches as a pass rusher. He’s looked comfortable in run defense. It’s been fun to watch him. I can’t wait to join him on the left side. I’m looking forward to getting back.”

Dupree missed some time, and the first preseason game, after suffering a concussion and the birth of his child, but suited up last week and recorded a sack against the Green Bay Packers. It’s a critical year for him, we’ve talked about it a dozen times, and a make-or-break season if he wants the Steelers to pick up his 5th year option.

Pittsburgh, in their mind, is giving him the best chance possible by flipping him and Watt, putting Dupree at ROLB, the blindside of any right-handed quarterback. A move Watt thinks will help.

“Bud will be a great pass rusher from the blind side. I think he has great dip. He dips better from the right side so he’s able to bend the corner a little bit better.”

Although Watt hasn’t gotten much work this year on the left side, he lined up everywhere at Wisconsin. Meaning the switch isn’t much of a difference for him either.

It’s unclear when Watt will be back on the field. Saturday is likely his last chance to play in the preseason before the finale where all the starters sit out. During Sunday’s Family Fest practice, Watt took a step forward by playing in individual drills, though he failed to work in team. Worst-case scenario, he’ll be ready for Week One, but it would be nice to see him log some snaps before the games start to count. If for nothing else, just to have all 11 defensive starters on the field together, a rarity so far this season.