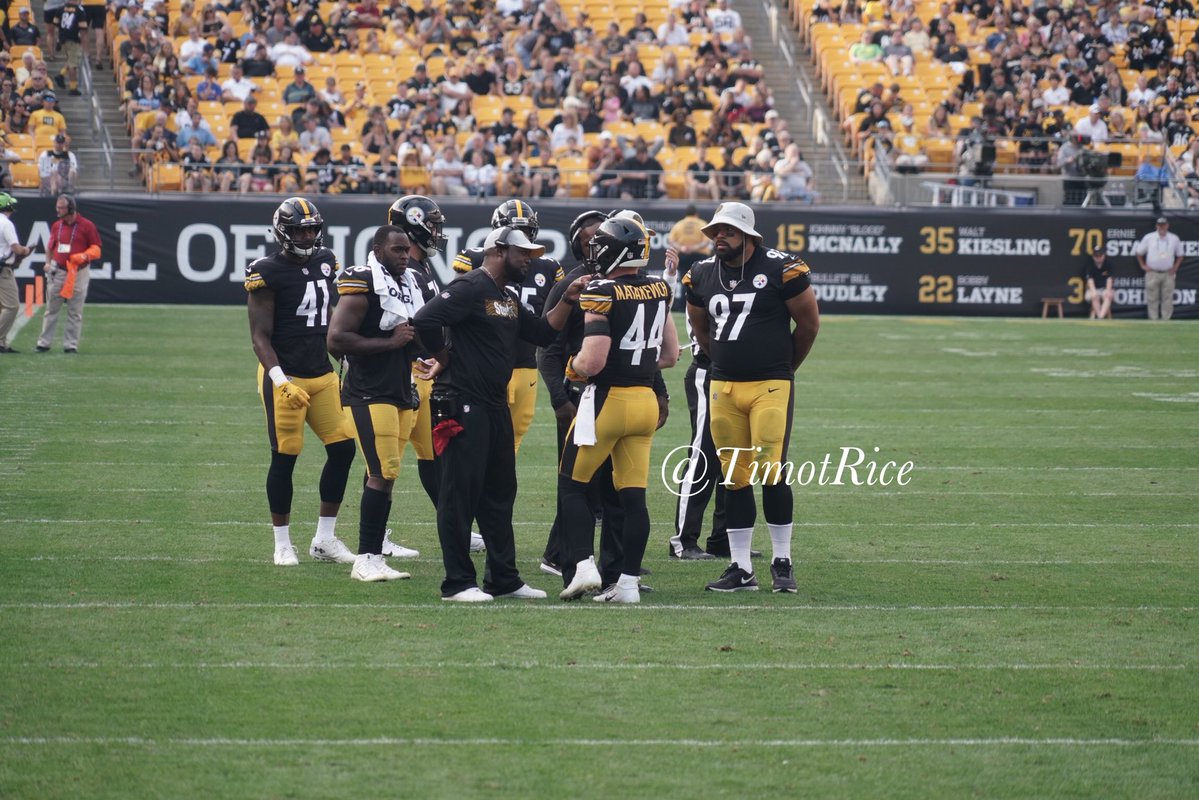 It wasn’t as explosive as last week’s score line, but Saturday afternoon’s third preseason game against the Tennessee Titans was an all-around good game for the Pittsburgh Steelers.

Pittsburgh came out with the 16-6 win, getting three field goals from Chris Boswell, while the defense looked much, much better at home after a drubbing on the road at Green Bay.

There were some individual players to get excited about after the third preseason game, while others showed they’re just playing out the string until cuts come on Sept. 1.

Lets take a look at some grades.

In his first action of the preseason, Ben Roethlisberger looked rather rusty at times, missing high on occasion to Jesse James, while also throwing behind a couple of receivers across the middle. However, Roethlisberger dropped a dime to Justin Hunter down the right sideline for a 32-yard touchdown, showing Steelers fans all they really needed to see Saturday afternoon.

Landry Jones didn’t do much to write home about, throwing a deep ball out of bounds, and getting dinged with an interception due to a wrong route by Hunter before Hunter had the ball wrestled away for the interception in the red zone. That being said, he didn’t do anything to lose his backup job. He’s firmly entrenched as the No. 2.

I thought Mason Rudolph bounced back well from a rough performance in Green Bay. Rudolph showed poise in the pocket, took what the defense gave him at times, and commanded the offense well, leading the Steelers on two scoring drives.

The second string offensive line did no favors for Rudolph though, struggling to protect the rookie signal caller.

James Conner sure is showing the Steelers’ brass that he’s something to build around in the backfield moving forward. He’ll certainly slide into a reserve role once Le’Veon Bell returns Sept. 1, but he’s shown the Steelers he can be a workhorse so far this preseason.

Saturday’s performance did nothing to change that thought.

Conner struggled to churn out yards as a runner, finishing with just 18 yards on 10 carries, but the second-year back hauled in seven passes for 61 yards, showing good hands out of the backfield, capping off each play with power.

Jaylen Samuels also showed out on Saturday after, especially as a receiver, continuing to make a number of defenders miss one he got his hands on the ball. Samuels had a touchdown called back due to a holding on Marcus Tucker, but the flashes were consistent Saturday from the fifth-round draft pick. Samuels also ripped off a 20-yard run on his first carry of the game, planting his foot in the ground and getting upfield in a hurry.

JuJu Smith-Schuster got a lot of looks from Roethlisberger early and often, and struggled for the most part. The second-year receiver had two big drops, one on a crossing route on a free play due to a Titans offsides, and one on a fourth down in which he got his hands on the ball thrown behind him, but couldn’t hang on.

James Washington didn’t do much on few targets Saturday afternoon before leaving the game in the second half with an abdominal injury. Stay tuned on that one.

It was nice to see Trey Griffey get some run with the first-team offense. Roethlisberger has been vocal about how much he likes him. Griffey didn’t do much in the receiving department, but he played well on special teams.

Justin Hunter made a great catch on his 32-yard touchdown, getting both feet down after pulling away late from Adoree’ Jackson for the score. Hunter also fought through a Jackson tackle earlier on the drive, but he washed away all that good will with the wrong route and the drop, allowing the Titans to pick the ball off.

Damoun Patterson is losing steam too, but that’s more because he’s simply not being targeted. He’s got to have another big week in the final preseason game if he wants to make the roster.

James made a great leaping catch across the middle, and added another catch in the game on five targets. Roethlisberger missed badly a couple of times to James through no fault of is own. It just feels like a big season is coming for James.

Bucky Hodges simply can’t block, or doesn’t know what that area of the game is like. He was caught standing around far too often in the ground game. For all he could possibly bring as a receiver, he just can’t cut it with this team because of his blocking.

Pharoah McKever didn’t do much of note Saturday afternoon. He did have a catch wiped out by penalty though. That’s not great for his chances, considering Xavier Grimble had his cast and stitches removed Friday.

The first-team unit did a nice job of protecting Roethlisberger early on, but they simply couldn’t establish a ground game against a rebuilt Titans front seven.

Aside from the first unit, the second and third units were rather disappointing, thanks to a high snap, multiple holding calls, and a number of free defenders running at Mason Rudolph.

RJ Prince had a poor game, allowing a sack, getting called for a hold on Rudolph’s scramble, and generally couldn’t stay in front of his man consistently in pass protection.

Chukwuma Okorafor was also called for a hold, wiping out Rudolph’s throw to McKever down the right sideline.

It’s hard to watch the guys in the trenches well enough to come away feeling strongly one way or another directly after the game, so I’d like to go back and watch the film. But overall, not a great feeling about the offensive line coming out of this one.

This unit was darn good all game long.

Stephon Tuitt looked like his old self, disrupting the Titans’ offense right from the get-go, while Cam Heyward made a mockery of the Titans’ offensive line throughout his time on the field. Both Tuitt and Heyward finished with sacks on the afternoon.

Javon Hargrave looked good as a run defender, getting good push up front, flowing well to the ball, while Lavon Hooks really impressed in the second half, recording a sack and three stops. Maybe he’s starting to push LT Walton some.

I really thought this unit was exceptional throughout the game.

Guys like Jon Bostic, Matthew Thomas, Ola Adeniyi, Keion Adams, and Bud Dupree played well in their own rights, while Vince Williams and Anthony Chickillo were solid. Last week, this unit was chastised unfairly after reviewing the tape. They were solid once again.

Bostic looked to have settled into his role against the run, coming downhill with force throughout the first half as the Steelers shut down the Titans’ ground game for the most part.

Williams recorded a sack on another great blitz and finished with three stops, while Dupree had another solid game against the run, also applying pressure to Marcus Mariota that caused an interception by Terrell Edmunds.

Matthew Thomas was the star though, finishing with a team-high nine stops. He showed he can play the run, pass, and play special teams. This guy is going to make the 53-man roster and is going to have a good-sized role before the season is done and over with.

LJ Fort also had a very solid game, finishing with four stops and a tackle for loss. Fort had a pick-6 called back, but answered right back with a great blitz to force an incompletion from Blaine Gabbert, turning the ball over on downs.

Outside, Adeniyi looks to have secured a roster spot. He’s a darn good pass rusher, adding another sack to his credit this preseason, and he showed the ability to stack, shed and stick the ball carrier at the line of scrimmage. What a preseason he’s had.

Lost in the Adeniyi hype has been Keion Adams, who had another solid game off the edge for the Steelers. He’s shown good burst and bend, and has powered through some blockers as well. It’s going to come down to Adams and Farrington Huguenin for the final OLB spot. Huguenin added a sack in the fourth quarter.

Terrell Edmunds sure had a nice game today. His closing speed allowed him to under cut Mariota’s throw in the second quarter, resulting in an interception. He also showed off some serious skills with the ball in his hands on the return. Steelers have a player there. Patience is needed.

Joe Haden had a good showing at corner, coming up for a big stop on Derrick Henry in the first quarter, while Artie Burns and Coty Sensabaugh had strong days at corner as well.

The Titans passed for just 168 yards on the day, largely due to a great pass rush. It’s easy to look good as a secondary when quarterback’s don’t have time to through.

I wasn’t pleased with Jordan Dangerfield today. He was bad.

On third and forever, Dangerfield overran a throw up the seam by Gabbert, expecting the ball to be overthrown. Searching for the pick, Dangerfield didn’t play the man and allowed a long third down conversion. Later in the game, Dangerfield channeled his inner Mike Mitchell and was called for taunting after a long Titans run.

Chris Boswell is worth every penny. Not that you readers didn’t know that already.

The newly-extended kicker drilled all three field goals on the day, helping the Steelers pull away for the win.

There are very few kickers better in the NFL today.

Do we have a punter controversy?

Fitzgerald Toussaint had just one kick return for 10 yards.  Expect the Steelers to being drives deep in their own end this year on kickoffs. It will probably be a league-wide thing too.

I mentioned the Tucker was called for holding on special teams, while Tyler Matakevich continues to show how valuable he is on special teams. The guy just runs down kick after kick. It’s impressive.