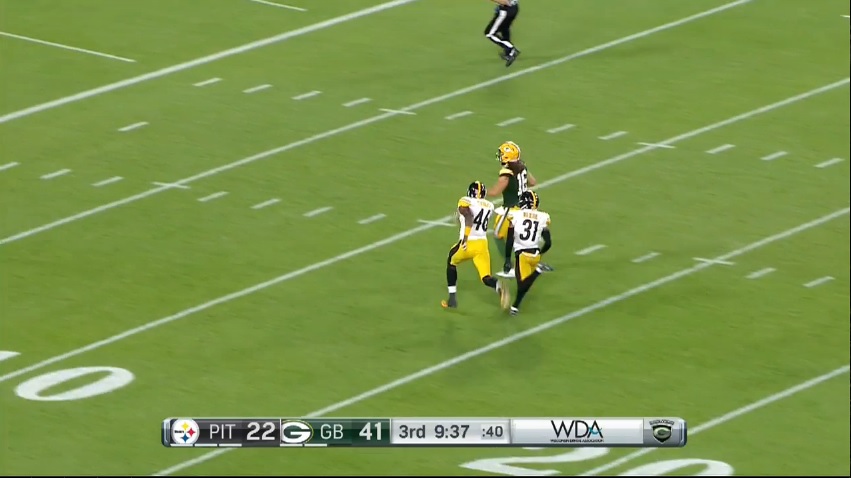 Let’s take a look at the five most important plays in the Thursday night preseason game between the Pittsburgh Steelers and Green Bay Packers.

Well, that’s one way to get a game off to an awful start.

Starting with most of the first offense Thursday night, Mason Rudolph got his chance to impress the coaching staff, and instead it took a disastrous turn right away.

Rudolph stared down the stop route to Darrius Heyward-Bey on the left side of the formation, allowing veteran cornerback Tramon Williams to jump the route for the easy pick-6.

This was likely supposed to be a simple pass play to get Rudolph into the flow of the game. Instead, he watched as a veteran cornerback took the ball the other way for a score, giving the Packers a lead just 13 seconds into the game.

Facing a fourth down late in the first quarter, the Steelers decided to go for it trailing 17-14, giving Rudolph a valuable game rep in a must-have situation.

Unfortunately, rookie left tackle Chukwuma Okorafor was beaten off the line at the snap by Reggie Gilbert, causing Rudolph to take a hit, getting rid of the ball faster than he wanted to. Rudolph targeted fellow rookie James Washington on a crossing route, but the ball came out too quickly, allowing Davon House to stay in Washington’s back pocket, tackling the rookie for a 1-yard loss, forcing the turnover on downs.

The turnover on downs led directly to points for the Packers.

This play right here pretty much summed up the Steelers’ night defensively.

Pittsburgh applied a ton of pressure to Brett Hundley, causing him to spin around in the pocket looking for an escape lane. He didn’t find one, at least until Stephon Tuitt grabbed ahold of him, spun him around again and missed the sack, giving Hundley the chance to see wide open grass to his left, racing down the left sideline for a 10-yard touchdown.

Instead of going for a big sack to force a third and long, the Steelers found themselves down by 10, 24-14.

James Washington simply went up and got this touchdown over the Green Bay cornerback.

It was a poorly thrown ball by Dobbs, but Washington bailed out his quarterback in the back right corner of the end zone, leaping high over the defender, flashing strong hands to rip a would-be interception away, turning it into a pivotal touchdown for the Steelers.

Washington’s first score capped off a three-play, 45-yard drive that pulled the Steelers to within 19 points at 41-22.

Just as the Steelers started to get back on track in this one, the defense came through with another dreadful play.

DeShone Kizer threw a bullet to Jake Kumerow near the left sideline that just got past the diving Brian Allen, allowing Kumerow to get off to the races.

Nat Berhe didn’t do much to slow down Kumerow, who raced untouched for the 82-yard touchdown, putting the Packers back out in front by 26, allowing Green Bay to coast the rest of the way.