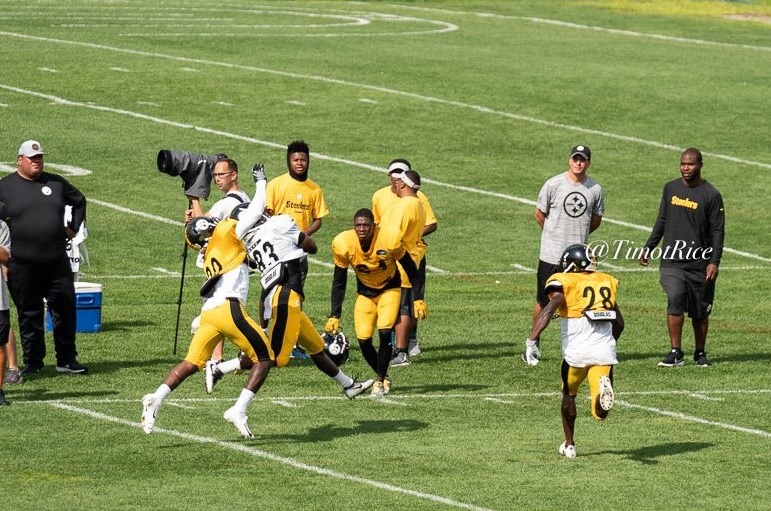 First game in the books. Winners and losers from the Pittsburgh Steelers31-14 win over the Philadelphia Eagles.

Damoun Patterson: Patterson lived up to his training camp hype, doing well to reverse course after a fast start that faded as camp went on. Absolutely brilliant adjustment on his touchdown from Josh Dobbs. Like in college, he ran his routes as a receiver and then saw action as a gunner on the punt coverage unit. He briefly left the game but bounced right back and finished the game. Showing he has the talent and production to make the practice squad.

Stevan Ridley: Ridley was explosive and a tough runner, bailing QBs out as a checkdown option. He played fast, which is to be expected when he’s a vet going against several rookies, but showed the juice that warrants entertaining the idea of keeping him around, even if that means having four running backs on the roster.

Ola Adeniyi: Hello, rook. Just as he’s done in training camp, Adeniyi showed his strength, how difficult his lack of height is for opposing tackles, and pass rush plan. A simple dip and rip against the left tackle for a strip-sack fumble, recovered by the Steelers. There’s no doubt in my mind he’s someone who can rush the passer. Everyone saw that today.

James Conner: Conner didn’t get a ton of work but he was the only competent looking player on the first two drives. Conner ran with good pad level, an asset out of the backfield, and though he was a little shaky in pass protection (the sack with him on the field wasn’t 100% his fault), it was still a quality performance. You see the burst he has and at that size, he can move the pile forward.

JuJu Smith-Schuster: Worried about the fame getting to JuJu’s head? Man I hope not. On a free play, he plucked the ball over the corner, high-pointing the ball and adjusting back to it, and then finishing for a 71 yard score. He’s fine so please, R-E-L-A-X.

Marcus Tucker: Tucker didn’t do much on offense but his pathway to the roster is through special teams. There, he helped himself. Tackle on the opening kickoff and then downed a punt at the one yard line. Good way to get Danny Smith in your corner.

Ball-hawking secondary: Two interceptions on the day, one by Coty Sensabaugh and then later from Cam Sutton. We’ve seen an aggressive, opportunistic defense in camp, picking off 13 passes in 11 practices. Three turnovers today, adding in the Adeniyi forced fumble/recovery. Just preseason but I like it.

Tackling: It was pretty good in camp. Tonight? Eh…call it a work in progress. Tyler Matakevich missed a sack that led to a TD, Sensabaugh missed a tackle earlier in the drive that would’ve gotten the defense off the field, and Morgan Burnett, Jon Bostic, and Artie Burns also missed on the same play. Not great.

Tyler Matakevich: Speaking of Matakevich, definitely not the debut he wanted. Bostic started over him, Matakevich missed the aforementioned sack (Mike Tomlin specifically pointed that out in a halftime interview). He saved a little face with a forced fumble but it doesn’t feel like he’s going to wind up the starter.

Special Teams Penalties: I guess it’s to be expected considering the influx of new players, many who didn’t play on teams in college. But it wasn’t a pretty sight. Twice, the Steelers were flagged for illegally lining up on an extra point and there was plenty of yellow elsewhere.

Keion Adams: Not going to panic about this one, not going to panic aboutanyonein fact, but Adams didn’t get the start, just as has happened in camp. Farrington Huguenin got the nod at LOLB. When Adams did play, he was non-descript. It’s nice to see him out there after suffering a minor injury in camp, and this is his first NFL game, but with depth at the position thin, you’re looking for a “wow” preseason out of him. Or something to get you excited.