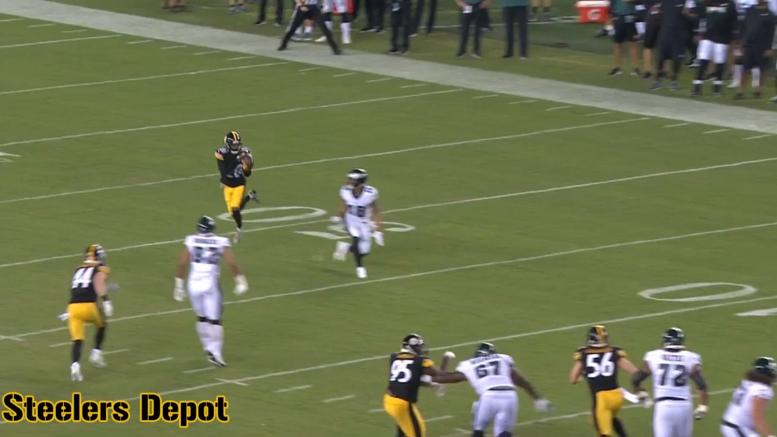 One of the biggest criticisms of the Pittsburgh Steelers’ defense over the course of the better part of the 2010s is the fact that they have had difficulty in taking the football away, particularly through the air. It’s been a long time, for example, since any player has intercepted four or more passes in a single season.

With a new-look secondary, a new instructor, and a new philosophy aimed toward giving their defensive backs more opportunities to make plays on the ball, training camp has so far seemed to bear the fruits of this labor, the defense beginning to rack up the interceptions in comparing to previous years.

And they got off to a good start on that front last night when they actually got to face quarterbacks who are not their teammates. Granted, the Philadelphia Eagles were without their top two quarterbacks on the dept chart, but the Steelers got two interceptions off of Nate Sudfeld and perhaps had a shot at a third as well.

The first came courtesy of Coty Sensabaugh, the embattled veteran cornerback who is in his second season with the team and seventh in the NFL. Playing in trap coverage, he was able to bait the young cornerback to throw it right to where he would be early in the game.

Later in the evening, second-year Cameron Sutton got an interception of his own when Sudfeld and his receiver appeared to be at odds over where the wide receiver should be at the end of his route. Sutton was the player whom the Steelers replaced Sensabaugh with last season when the veteran was benched.

First-year safety Malik Golden also made a play on the football late in the game on a pass heading toward the end zone. Instead of playing for the pick, however, he swatted the ball out of bounds, but it was an opportunity in which the opportunity presented itself and a defensive back was in position to make it.

That has not come often enough in recent years, though there was improvement in that area last season, with Sean Davis’ three interceptions leading the way. With the recent additions of Joe Haden, Mike Hilton, and Morgan Burnett, not to mention Sutton and rookie Terrell Edmunds, however, this secondary is looking to make more plays.

That is at least part of what new defensive backs coach Tom Bradley has been instructing them to do, giving them more opportunities to play in man coverage or in coverages that give them the chances to jump routes.

Splash plays are always a point of emphasis, but with the changes in personnel and philosophy that have seemingly taken place over the past year or so, it’s not unreasonable to imagine that we will finally start to see more tangible results.