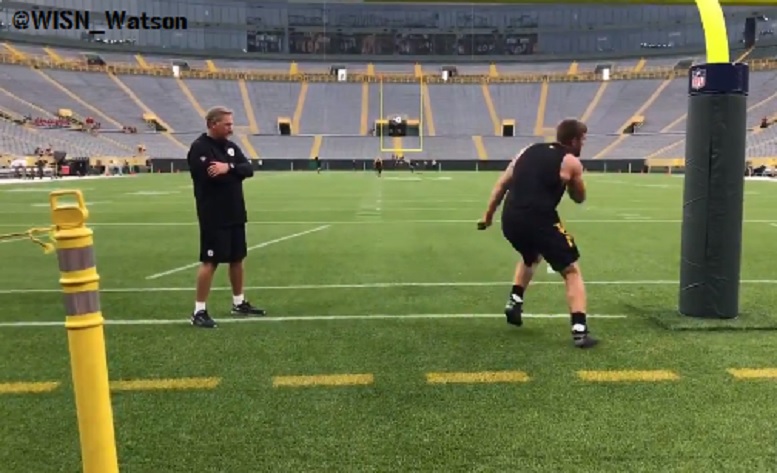 The Pittsburgh Steelers will play their third preseason of 2018 a week from tonight and at home against the Tennessee Titans. Whether or not Steelers outside linebacker T.J. Watt will make his 2018 preseason debut in that contest is still unknown, however, but it certainly sounds like there’s a possibility of that happening just the same.

“We’re going to see how it goes and keeping working with (strength and conditioning coordinator) Gi (Garrett Giemont) and keep ramping it up and see if it will be ready for game time, Watt said Saturday, according to Teresa Varley of steelers.com.

Watt, who has been sidelined with a hamstring injury since the team’s third training camp practice, did go through some warmups under the watchful eye of Garrett Giemont way ahead of the Steelers second preseason game this past Thursday night against the Green Bay Packers. You can see a short video of that below

“I don’t know what causes more guys around the league to have (hamstring injuries), but any time you are going hard and your shortening and elongating that muscle it can tighten up,” said Watt on Saturday about when he originally hurt his hamstring. “In my case I didn’t really have anything to show it was getting tight. Hopefully I will be back soon.”

Watt’s hamstring injury obviously resulted in him missing nearly all of this year’s training camp as well as the team’s first two preseason games. He admitted how frustrating that is on Saturday and especially with him switching sides this season with fellow outside linebacker Bud Dupree, who made his 2018 debut against the Packers after missing some training camp practices and the first preseason game because of a concussion.

“This is the time when you really gel as a unit and get better and really learn how to play off each other, especially with some new parts on defense, and me playing left side,” said Watt. “You want to play more and get more reps. I am just trying to be really smart with my body this time of year.”

We’ll have to wait and see if Watt will ultimately be cleared to play a week from tonight and if he inst, perhaps he’ll get some valuable snaps in the preseason finale against the Carolina Panthers.

“I am confident once I am back healthy that I won’t have a problem playing the left side,” said Watt. “I think I will be all right.”