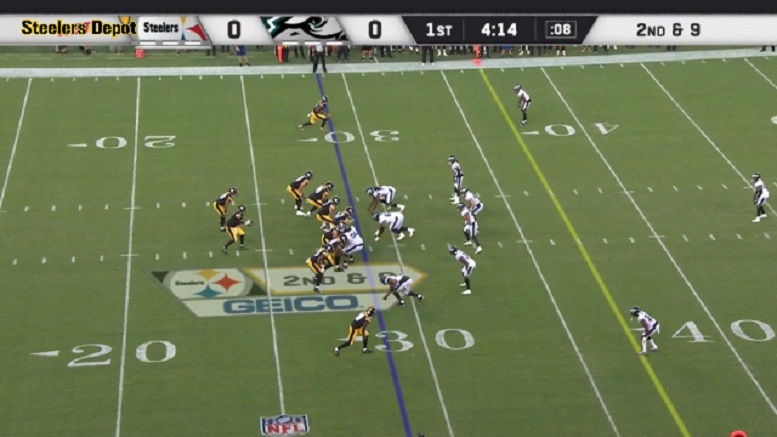 The Pittsburgh Steelers 2018 preseason opener against the Philadelphia Eagles not only ended in a win, it also included the team’s offense connecting on three explosive pass pass plays of which two resulted in touchdowns. The first of those two explosive scoring plays came with 4:02 left in the first quarter when quarterback Landry Jones connected on a deep pass down the left side of the field with wide receiver JuJu Smith-Schuster for what ultimately resulted in a 71-yard completion and put the Steelers ahead 7-0. That play and ultimate score, however, was due mainly to Eagles defensive tackle Elijah Qualls jumping offsides prior to the football being snapped.

“You just go deep when they jump offside and the ball is hiked,” Smith-Schuster said after the game about his touchdown reception, according to Gerry Dulac of the Pittsburgh Post-Gazette. “All you’re thinking about is six points, score a touchdown. You see A.B. [Antonio Brown] do it multiple times. He scores half of his career touchdowns off dead plays. Stuff like that, you take full advantage of those.”

As you can see in the gif of the touchdown below. Smith-Schuster, in addition to fellow Steelers wide receiver Darrius Heyward-Bey, both take off deep after seeing that Qualls had jumped offsides. That’s great recognition on both of their parts and while his pass was ultimately a tad under-thrown, Jones at least did a good job of giving Smith-Schuster a chance to make the catch on the free play. Eagles cornerback Rasul Douglas certainly could have made a better play on the ball than he did and Smith-Schuster made him pay for not doing so.

One of the Steelers other two explosive plays later in the game also came as a result of the Eagles jumping offsides prior to the football being snapped. This time, however, it was rookies Mason Rudolph and James Washington taking advantage of a free play situation down the right side of the field. That play didn’t result in a touchdown but it did come on a 3rd and 8 and resulted in a gain of 35 yards just the same.

After the game, Steelers head coach Mike Tomlin was asked if the coaches coach the players to go deep and thus go for the big play whenever they see defensive players jump offsides.

“We have,” Tomlin said. “I think everybody knows that’s our m.o.. Cadence is a weapon for us. We’ve done it for a number of years now. It was good to see the young guys do it. Ben [Roethlisberger] does it routinely. It was good to see the young guys execute it and kudos to the other ten guys. It’s not just on the quarterback in terms of working the cadence, it’s the other guys holding their water, the center snapping the ball, we got good execution collectively on that front.”