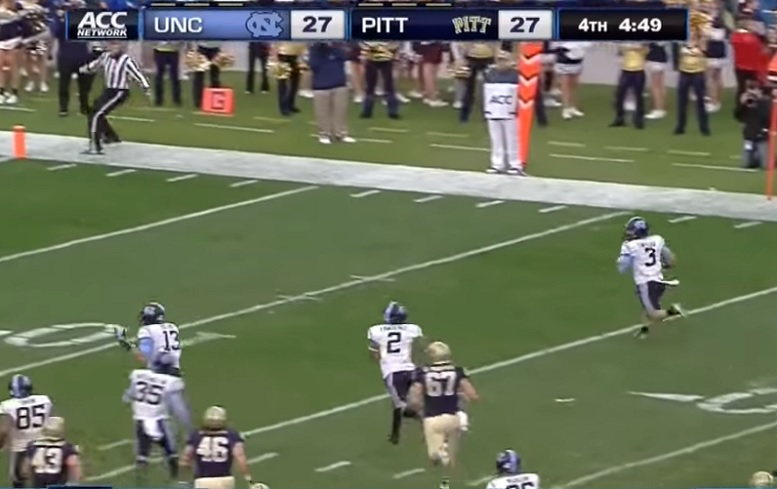 If things go as many expect they will, new Pittsburgh Steelers wide receiver Ryan Switzer will make his black and gold debut Thursday night in the team’s preseason finale at Heinz Field against the Carolina Panthers.

“It’s our intention is to get him on the field on Thursday,” Tomlin said during his Tuesday press conference about Switzer possibly playing in the team’s preseason finale against the Panthers. “We’ll see what these next two practices look like and then what goes beyond that, we’ll let the dominoes fall and see how this week goes. But our intentions are to play him on Thursday, but we’ll wait and see what these two practices look like. The guy’s getting off a red eye, etc. , so let’s see how it goes.”

Switzer, who the Steelers acquired via a Monday trade with the Oakland Raiders, is already in Pittsburgh after quickly catching a flight from the Bay area to Pittsburgh immediately after learning he was dealt. On Tuesday, Tomlin was asked if the team’s new presumed kickoff and punt returner will have any sort of difficult transition going from the return scheme of one team to that of another one.

“Man, that guy’s been a returner all his life,” Tomlin said of Switzer. “I’d imagine it’s like breathing or swimming, or riding a bike. I don’t imagine it would be really significant.”

Even though Switzer will need to learn how to play the slot position in the Steelers offense, he said Tuesday that he knows his immediate focus will be for him to quickly help as a returner.

“I know the return game is going to be something that I can pick up quicker,” Switzer said Tuesday. “Obviously, I’m going to dive into the offensive playbook and try to find my niche there, but I know that, obviously, you can throw someone back there on the returns sooner than you can offensively. So, that’s what I’m kind of focusing on right now.”

Should Switzer indeed suit up and play Thursday night against the Panthers he’ll do so in some very familiar surroundings as he’s already played quite a few football games at Heinz Field. In a 2015 game with North Carolina against Pittsburgh at Heinz Field, Switzer caught 5 passes for 126 yards and a touchdown. While he didn’t have much success as a punt returner in that particular game, two returns for a loss of 2-yards, he did in a 2013 game against Pittsburgh at Heinz Field as a freshman as he returned 3 punts in that contest for 126 yards and 2 touchdowns in addition to catching 2 passes for another 21 yards.

“I really, really, really enjoy playing at Heinz Field,” Switzer said Tuesday when asked about the success he’s already had in the Steelers home stadium during his football career. “I grew up going to some games there as a kid and I think the good karma just followed me to college. So, hopefully it sticks with me.”

In addition to him already being familiar with the surroundings of Heinz Field, Switzer has long known a few of his new teammates with one of them being running back James Conner. The two players reportedly first met during their senior years of high school at a Rivals/VTO Camp in Pittsburgh. Conner was a defensive end out of McDowell High School in Erie, Pennsylvania while Switzer was a multi-sport star out of George Washington High School in Charleston, West Virginia.

“Me and James go back,” Switzer said Tuesday when asked about him already knowing Conner. “It’s pretty cool to see him on the same team and in the same locker room. It’s crazy where this game can take you and where life can take you in general.”

The Steelers are now Switzer’s third NFL team since he was originally selected by the Dallas Cowboys in the fourth-round of the 2017 NFL Draft out of North Carolina. He’s not really sure why he’s already been traded twice, but it doesn’t sound like he’s worried about where he’s already been, only about what lies ahead for him.

“Man, I don’t know,” Switzer said Tuesday when asked why he thinks he’s already been traded twice since being drafted. “The things I’m learning is everyone’s path’s different. Obviously, no one really expects to get traded twice within their first year of the NFL. I’ve had kind of an unconventional path being drafted and then traded twice, but ultimately I’m here for a reason. I believe that I’m one step closer to finding the place where I fit in and the place where they’re going to value me and where I can be myself.”