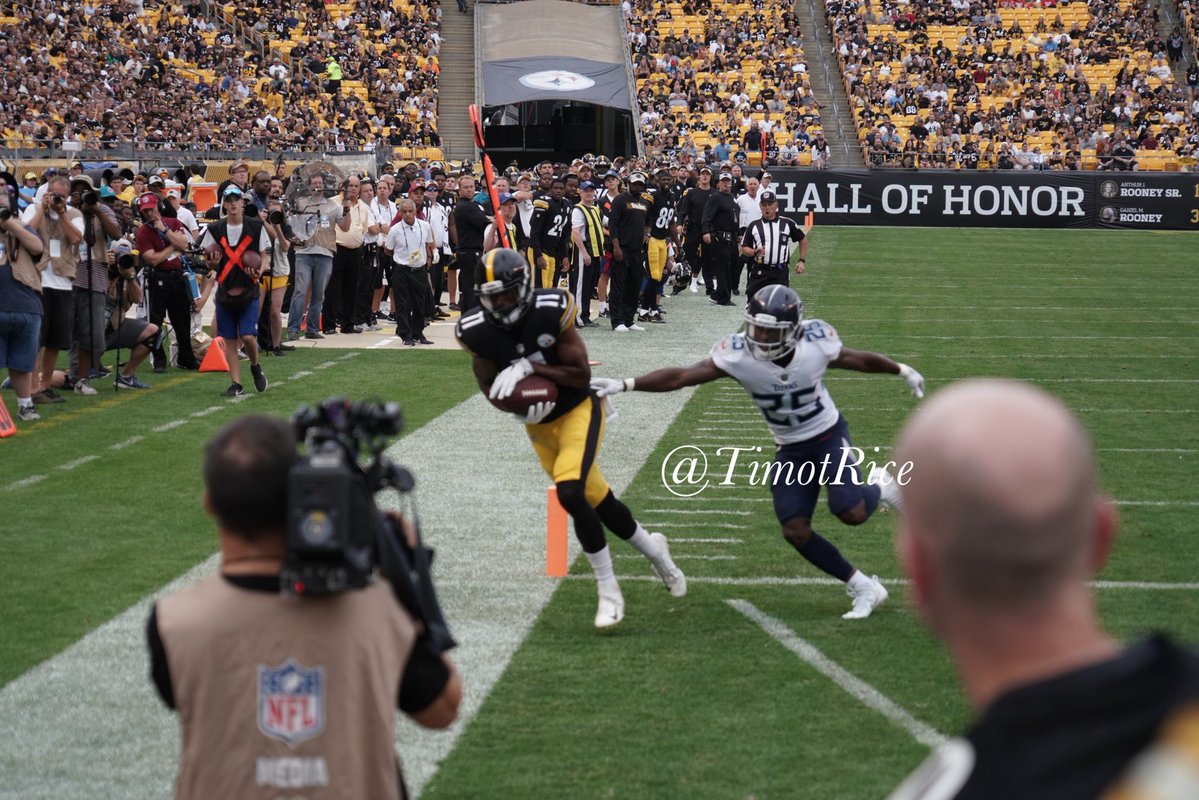 Ben Roethlisberger showed a little bit of rust in his preseason debut but his 32 yard touchdown pass to Justin Hunter was vintage #7. That was the lone touchdown put up by the first-team offense in the team’s third preseason game, an eventual 16-6 win against the Tennessee Titans.

Mike Tomlin trotted Roethlisberger out for three series extending into the early parts of the second quarter, who would finish the day 11/18 for 114 yards and that touchdown. A drop by JuJu Smith-Schuster hurt him, though a bad miss to Jesse James down the left seam cost Roethlisberger some more yards.

“I thought he did some good things, great things from a communication standpoint,” Tomlin told Missi Matthews at halftime. “He felt good to get out here and play. We got some production. It was a good outing.”

“I would’ve liked to knock a little more rust off,” Roethlisberger, with a smile, told Matthews.

The Steelers, as Roethlisberger hinted at earlier this week, used plenty of no-huddle offense too. Tomlin said he was pleased with that aspect of work too.

“I liked his overall command of the offense pre-snap.”

James Conner was heavily involved in the passing game, catching seven passes in the first half whether that was him split out wide, as a checkdown option, or in the screen game. Pittsburgh tacked up a Chris Boswell 42 yard field goal right before the first half ended to take a 10-0 lead into halftime.

Defensively, the Steelers’ pass rush got him. Stephon Tuitt busted up the middle unblocked for one of the team’s two first-half sacks on Marcus Mariota. Pressure by Bud Dupree led to the Steelers’ lone interception of the half, the first pick by rookie Terrell Edmunds, diving out to pick Mariota off and return it 30 yards the other way.

Still, it wasn’t all perfect. Miscommunication in the secondary was evident. On one third down, Mariota skipped a low throw to a wide open Corey Davis. Had it been complete, it likely would’ve gone for six. Mariota finished the day a quiet 5/8 for 43 yards, the pick, and two sacks.

Pittsburgh out-gained the Titans 176-52 after the first half and tripling them in first downs, 12 to 4. Elsewhere with the first team, Smith-Schuster hauled in six passes for 46 yards. Jesse James was targeted early and often, six in total, but only two landed complete.

Tomlin kept most of his defensive starters on the field for the first possession of the second half, ending in a Cam Heyward sack on Blaine Gabbert. Mason Rudolph got the nod over Josh Dobbs but three penalties as they entered the red zone negated a touchdown threat. Boswell notched a 33 yarder to make it 13-0. The offense had a similar story late in the third quarter, starting near midfield and driving to the Titans 27 before Boswell made his third of the day from 45 yards out.

Tennessee, whose offense sputtered most of the day, got things going on the ensuing drive. Gabbert led an 11 play, 82 yard drive, in part thanks to a Jordan Dangerfield taunting penalty, before hooking up with TE Anthony Firkser for a three yard score. The two-point conversation failed, giving the Steelers a 16-6 lead.

The Titans got the ball back mid-way in the 4th quarter. But a failed 4th down conversation, L.J. Fort applying pressure, stopped their last best chance of getting back into the game.

With the win, the Steelers move to 2-1 this preseason. They’ll play the finale this Thursday against Carolina. Kickoff is set for 7:30.

NOTES: Rudolph finished the day 7/11 for 65 yards…Josh Dobbs did not play…he is expected to start Thursday….Matthew Thomas led all players with nine tackles….Cam Sutton was the starting punt returner but fumbled his first opportunity…Damoun Patterson was held catchless…Marcus Tucker suffered an ankle injury and James Washington didn’t finish the game due to an abdominal injury…Titans RB Derrick Henry carried the ball 5 times for 12 yards…Pittsburgh outgained Tennessee 278-210…the two sides combined for 17 penalties