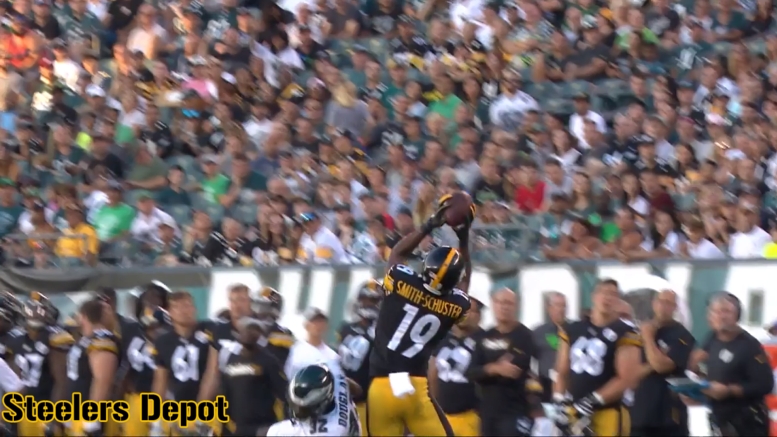 The Pittsburgh Steelers understand that they have a good system in place, from scouting to development, that allows them to restock their wide receiver position without overcommitting to the group in terms of finances. Perennial All-Pro Antonio Brown is the obvious exception, but even just over the past two offseasons, they have essentially remade their core group behind him.

One of the chief qualities that the decision-makers have touted in pursuing for their latest acquisitions has been the ability to excel in situations that require adversity, particularly in ‘combat catches’, as Head Coach Mike Tomlin prefers to call them.

Second-year wide receiver JuJu Smith-Schuster was known for this in college, and showed that during his first season in the NFL. Rookie James Washington was of a similar mold, and after he was drafted even talked about how he embraces the physical aspects of his position and of going up and getting the football, a quality that some of the team’s more finesse wide receivers in recent years may have lacked.

Both young receivers put that combat catch ability on display last night for big plays, as did rookie undrafted free agent Damoun Patterson, who led both sides with six receptions for 77 yards and a touchdown. He scored on a 29-yard strike from Joshua Dobbs in which he was required to adjust to the ball in the air and snag it rather than let it come to him.

This is not an inconsequential anecdote. These are big plays in the game, and will be big plays in September, getting bigger and bigger with each passing month. The Steelers’ most recent Super Bowl victory is owed to such a catch by Santonio Holmes, arguably one of the great plays in NFL history.

This is the sort of quality that the coaching staff is looking to find as a regularity in their receiving corps, primarily with Brown, Smith-Schuster, and Washington, and the fact that we saw the latter two do that in meaningful ways against the Philadelphia Eagles last night is certainly a positive sign.

New wide receivers coach Darryl Drake seems to put a particular emphasis in making sure that his charges are able to handle themselves from a physical standpoint, and that includes not just at the catch point, but also in the route and at the line of scrimmage. They are getting back to the idea of the wide receiver as a physical position.