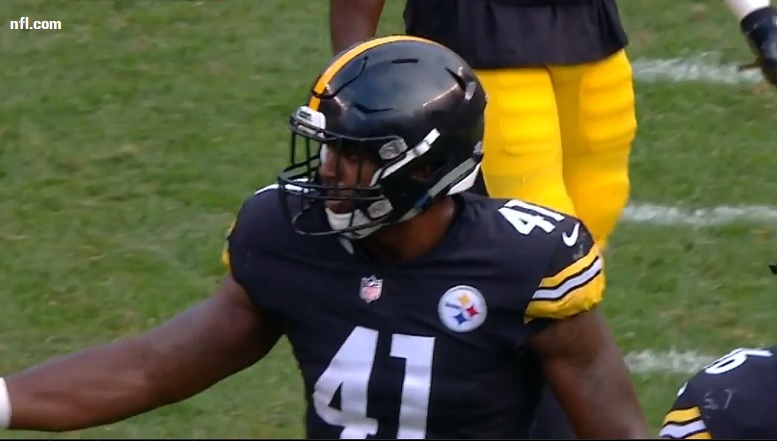 The Pittsburgh Steelers fourth and final preseason game of 2018 will take place Thursday night at home against the Carolina Panthers. Prior to every preseason game this year I have been spotlighting one offensive and one defensive player that I believe should be focused on throughout the contest. However, none of the players that I spotlight in this series will be draft picks of the team. Instead, I am focusing on younger players who joined the team this year as rookie or first or second-year free agents.

The defensive player I chose to spotlight for the Steelers fourth and final preseason game against the Panthers is outside linebacker Farrington Huguenin.

The Steelers will likely sit starting outside linebackers T.J. Watt and Bud Dupree Thursday night and especially the former as he’s still attempting to fully overcome a hamstring injury he’s been dealing with since the early stages of training camp. If Dupree plays at all, it isn’t likely to be much. The Steelers have plenty of young outside linebackers that could use extensive playing time Thursday against the Panthers and that list of players includes Huguenin, who has already logged 70 total defensive snaps so far this preseason in addition to 13 special teams snaps.

Huguenin, a former undrafted free agent out of Kentucky, spent the entire 2017 season on the Steelers practice squad. He has logged 3 total tackles during the teams three previous preseason games and that includes a sack. He should have several more opportunities to rush the Panthers quarterbacks Thursday night and potentially from the left side of the defense.

While Huguenin enters the Steelers final preseason game of 2018 as a dark-horse to make the initial 53-man roster, stranger things have happened. One injury Thursday night to one of the Steelers outside linebackers could potentially impact his chances of sticking around past Saturday. Additionally, Huguenin still has some practice squad eligibility so that needs to be kept in mind as well.