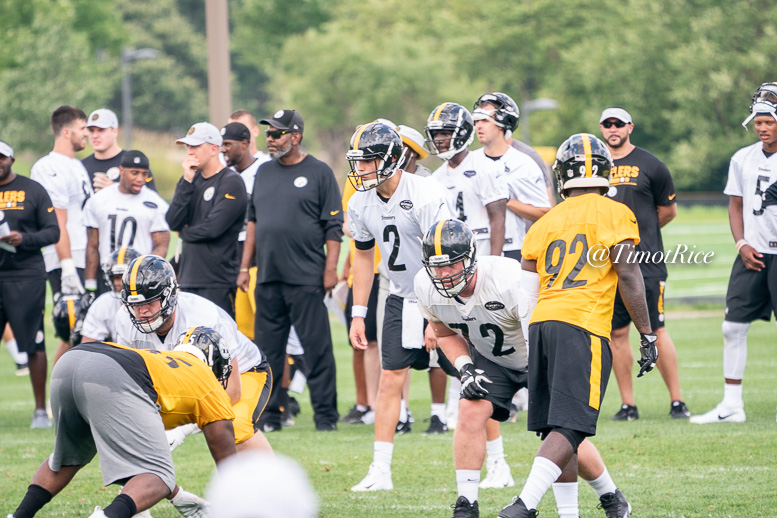 The Pittsburgh Steelers 2018 preseason will get underway Thursday night with a road game against the Philadelphia Eagles. Prior to every preseason game this year I will spotlight one offensive and one defensive player that I believe should be focused on throughout the contest. However, none of the players that spotlight in this series will be draft picks of the team. Instead, I will focus on younger players who joined the team this year as rookie or first or second-year free agents.

The defensive player I chose to spotlight for the Steelers first preseason game against the Eagles is outside linebacker Olasunkanmi Adeniyi.

Adeniyi, who measured in at this year’s scouting combine at 6011, 248-pounds, signed with Steelers as an undrafted free agent out of Toledo where he played defensive end. He was named second-team All-MAC in 2017 after finishing the season with 66 tackles, which tied him for the fourth-most on the team. Adeniyi also led Toledo and finished third in the MAC with 20 tackles for loss in 2017 addition to registering a team-high 8.5 sacks, fifth-most in the MAC. You can see those sacks in the video below.

According to stats compiled by Pro Football Focus, Adeniyi recorded 44 pressures in 279 pass rushing snaps off the edge last season at Toledo. Additionally, his pass rush productivity of 9.1 ranked tied for 16th among all FBS edge-rushers in 2017 with at least 250 pass rushing snaps.

#Steelers UDFA edge defender @Love_Ola_9 has impressed so far this offseason. Last season at @ToledoFB, he recorded 44 pressures in 279 pass rushing snaps off the edge. His pass rush productivity of 9.1 ranked t-16th among all FBS ED with at least 250 pass rushing snaps!

With starting outside linebacker Bud Dupree and T.J. Watt both expected to sit out the Steelers preseason opener against the Eagles because of injuries, Adeniyi  figures to get quite a bit of playing time in his NFL debut and especially if Adams also sits the contest out with whatever has ailed him recently. It will be interesting to see if Adeniyi is allowed to play on both sides throughout the game and how he ultimately fares against the run and as a pass rusher. Additionally, it should be fun to track how many times he’s asked to drop into coverage Thursday night.

On top of everything else, Adeniyi will likely be asked to play some on special teams Thursday night and that’s a phase of his game he’ll really need to impress in to improve his chances of making the 53-man roster.

Adeniyi will enter Thursday night as a prime candidate to ultimately be the Steelers defensive player of the game for Week 1 of the preseason. We’ll make sure to highlight his play, both good and bad, next week.