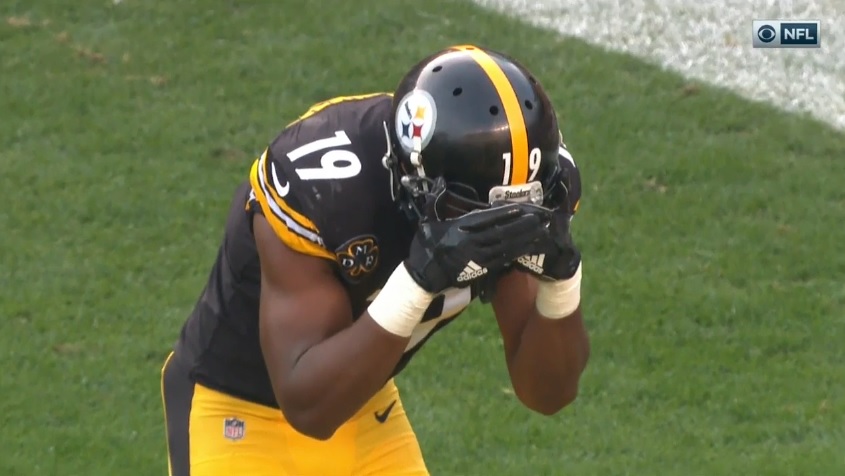 Even though he was ultimately selected in the first two rounds of the 2017 NFL Draft by the Pittsburgh Steelers, wide receiver JuJu Smith-Schuster firmly believes he would have been picked higher than 62nd overall if not for his age at the time.

“When I got drafted, one of the main reasons why I dropped was because of my age,” Smith-Schuster told Jason La Canfora of CBS Sports during a sit-down at the team’s minicamp this spring. “‘Oh, he’s not mature. He’s not ready.’ But to his day I always stay true to myself and be myself with the guys here, and I’m always having fun with everything I do, especially because I love playing football.”

While Smith-Schuster, who was selected 62nd overall by the Steelers last year, was the youngest player selected in the 2017 NFL Draft, his play on the field during his rookie season certainly didn’t reflect it. In fact, the USC product registered more than 1000 all-purpose yards in his first season in the NFL and in doing so he became the youngest player in the history of the NFL to accomplish that feat. The 917 receiving yards registered in 2017 by Smith-Schuster also ended up being the most by a Steelers rookie in team history, breaking a very old record set by Jimmy Orr in 1958.

While Smith-Schuster may have played like a much older player during his rookie season, his youthfulness was very evident in his touchdown celebrations throughout the season. His huge presence on social media also reflected a very young and inexperienced player and at times featured him riding his bike, learning how to drive and playing hours and hours of video games While Smith-Schuster has obviously received some unsolicited advise on how he should probably start carrying himself moving forward, he’s letting it go in one ear and out the other.

“There have been a few people who have said do this or do that,” Smith-Schuster said, according to La Canfora. “And I’ve turned the other cheek, and I don’t really pay attention to them, just because I got here because of myself and what I’ve done, and I’m gonna ride with that.”

As you can clearly see already at this year’s Steelers training camp thanks to videos posted by the team on their social media accounts, Smith-Schuster is a huge hit with fans of the team and especially the younger ones. Hes already established a strong brand for himself and that includes him being a YouTube and Twitch video superstar.

Smith-Schuster’s youthfulness is a breath of fresh air and while he’s sure to mature some in the coming years, hopefully he doesn’t lose his root personality along the way, or have it suppressed by others. If it’s true that you’re only as young as you feel, Smith-Schuster might have an extremely long and productive career in the NFL ahead of him with all of it hopefully being in Pittsburgh. A year and a half removed from him being drafted, Smith-Schuster really doesn’t feel any different than he did when the Steelers picked him.

“Nah, honestly I’m still the same, who I am,” Smith-Schuster said when asked by La Canfora about any newfound maturity. “I’m just having fun, but now I’m 21. So that’s the big difference.”