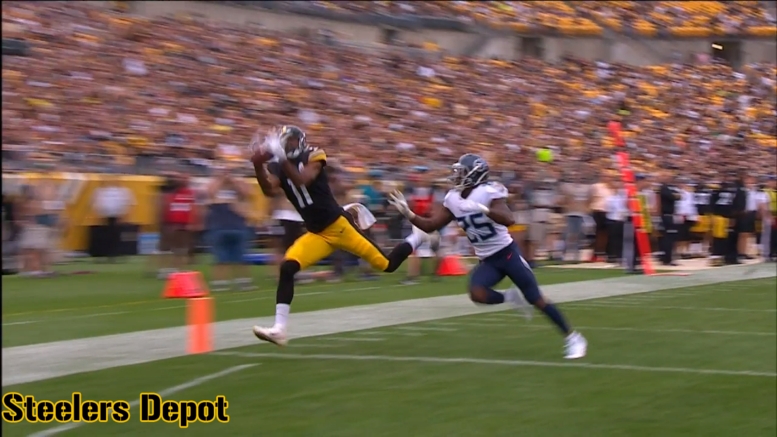 Pittsburgh Steelers sixth-year wide receiver Justin Hunter may have helped himself secure his roster spot for the second straight season with the team during tonight’s victory over the Tennessee Titans, but he also showed why he is never going to be a regular contributor but instead will remain a niche player.

The former second-round pick of the Titans can have his night summed up in three plays: on the second play of the game, he ran the wrong route, forcing Ben Roethlisberger to throw high to a secondary target; later, he hauled in a 32-yard dart for a touchdown, doing a great job of keeping his feet inbounds. Then he failed to secure a pass that he seemingly had possession of, allowing it to be intercepted.

Adding it all up, it kind of makes you glad that he is on the team, but that he is not going to be relied upon. The Steelers have a load of talent at the top end of the depth chart at the position with Antonio Brown, JuJu Smith-Schuster, and the rookie James Washington, who went for 114 yards and two scores last week but left early tonight with an oblique injury.

Hunter got very limited spot work in-game last season, and those opportunities usually came when there are injuries to different wide receivers. He finally capitalized on Christmas Day against the Houston Texans with a red-zone touchdown, his highlight so far with the Steelers.

But those flashes that he shows (more often in practices, less so in games) are what will continue to give him opportunities around the league. While he was with the Buffalo Bills in 2016, he only recorded 10 catches, but four of them went for touchdowns.

He can be a big-play threat in spots, but is not somebody who will be a highly productive player over a full season’s worth of work. Or at least if he does, it’s going to come at a cost with the deficiencies in his game. There is no reason at this point in his career that he should be running wrong routes as often as he has in his short time with the Steelers.

As a number four or number five target, however, that can be all that you need. He can be a valuable piece when used in a limited and controlled fashion. And generally speaking, he was last season. The problem was that the Steelers had too many wide receivers, and it was difficult for him to get a helmet.

Why? Because he doesn’t contribute on special teams, which is his vulnerability. All the wide receivers breathing down his neck—Darrius Heyward-Bey (who is a lock), Marcus Tucker, Damoun Patterson—have that ability to contribute in the third phase, and could earn helmets because of that.

Here is that Jones INT that should go to Hunter. #Steelers pic.twitter.com/M0ZvmxyltS